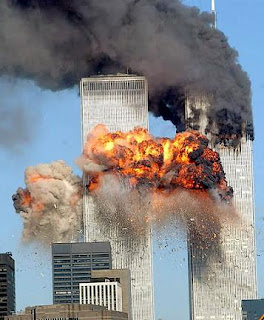 I'll NEVER forget every detail, emotion, and nuance of September 11, 2001. I remember the strange phone call from a friend saying "COME HERE NOW." I remember standing shoulder to shoulder with her, heart racing, seeing the first tower aflame and wondering how a pilot could be blind enough to fly into it. I remember seeing the second plane fly into the second tower and instantly understanding that we were under a terrorist attack. I remember going to the hardware store across the street and we two bought the largest American flag in stock, and we hung it up on the front of our offices. I remember going to the bank to get some cash and seeing the bank's television on and all the tellers watching, and we all looked at the smoking remnants of United 93 in the Pennsylvania field, and thinking the world was coming to an end. I remember learning that another plane had stuck the Pentagon and knowing that the world WAS coming to an end. It was horrible. A tragedy that ended the lives of thousands and the residue has burned itself on our hearts forever.

I substituted in a fourth grade today. We were adding homework notes to their calendar-agendas which are yearlong weekly notebooks. One boy looked ahead to this Friday and he pointed to a red, white, and blue ribbon in the corner of the square set aside for that day, 9-11. He asked, "What is that there for?" I replied that it was there to remember the terrible events of September 11, 2001 when all those Americans died.

"Why did they die?"
"Because the terrorists flew planes into buildings and people inside the planes and inside the buildings died from the crash."
"Wh-at??"
"How old are you?"
"Nine."
Ah. He was an infant. He doesn't know.

A whole generation is coming up that doesn't remember pre-and-post 9-11. Who don't know how our country was before, who terrorists are, or that such acts of murder had been carried out on our lands. It is history now, like Pearl Harbor. I wonder if his history book carries a section on 9-11. If it does, I wonder what it says.