Why I don't watch Doc Martin any more 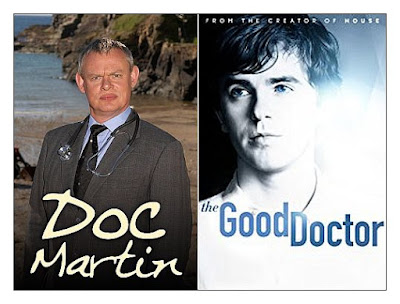 Doc Martin is a British ITV medical dramedy that has run continuously since 2004 (series takes a year off in between showings). The series depicts a fictional surgeon, Martin Ellingham, whose sudden onset of a fear of blood had caused him to retreat from his career in a busy London hospital to a sleepy fictional Cornwall town of Portwenn as a general practitioner, where the run-ins with blood would presumably be less frequent. The scenery is spectacular and the characters are suitably quirky.

Though it's never stated that Doctor Ellingham, or "Doc Martin" as the locals call him (to his uptight chagrin), is on the Autism Spectrum, in one episode a character playing a psychologist flatly said so. In addition, Doc exhibits many of the markers of Aspergers, including social deficits, appearing to lack empathy, unusual facial expression or postures, intense interest in one or two 'special interests' (medicine and clocks), no social filter, and etc.

The show presents the typical trope of fish out of water, and the fish is Martin and the waters are Aspergers. His gruff and to-the-point manner with no filter means the character has absolutely no bedside manner. He is a rule follower, and isn't nuanced. This means the character does not handle situations sensitively, either socially or medically. He has no friends, not for lack of trying on the people of the village's part. His empty social life doesn't bother him. He is single minded, once on a track he is like a bloodhound on the trail, nothing can make him give up. His main saving grace is that he can diagnose like nobody's business and he is never medically wrong.

He falls in love with school teacher Louisa, deeply. After many seasons, he gets up the nerve to ask her out and they begin a relationship. Of course, Martin isn't romantic and he often ruins dates or social situations with his bluntness. But what Louisa falls in love with are his positive qualities: he is loyal, courageous, brilliant, dedicated, a good listener, and in his own way, he cares deeply for Louisa and would never abandon or hurt her.

Just as in a neuro-typical relationship, an Autistic person has good qualities and irritating qualities. What I grew weary of is the writers' attempt to make all the compromises occur on Martin's side. Despite the character being unromantic, which Louisa knew going in, Louisa constantly complains Martin is not romantic. Despite Martin's abhorrence of social situations, Louisa constantly complains that he never wants to go out. And so on. Martin tries valiantly for Louisa's sake to adjust to her needs, which I found admirable. Louisa is never shown to be patient with Martin or make any compromises on her part. She just yells at him a lot for his deficits, making him feel crushed and bereft. Or she gives him the silent treatment, which, he doesn't understand why and he retreats back to medicine or clocks.

The series became all about Martin's inability to be the man Louisa wants, and it never focuses on his good qualities. A decent, loyal, brilliant, caring man is something to be valued, but the writers only deal with Martin's negative traits.

Yet Doc Martin functions perfectly well. He had a brilliant career in London, and though he is dealing with a phobia, is making a success of his second career in Portwenn. He has a love interest, a satisfying hobby (clock repair), and soon, a son. He has two aunts who love him, a home, and a life. Just like anybody else. But these things are seen as less than, because he is autistic.

It's been my observation that people on the Spectrum (myself included) can and do function well by making accommodations on behalf of fitting in to the society around us, but also working in tandem with the culture by making our own unique accommodations.

Another television show that has recently been released that explicitly features a main character on the Spectrum is The Good Doctor, on ABC. The character is Resident surgeon Shaun Murphy at St Bonaventure Hospital. Shaun has a unique ability to visualize any part of the body in 3D, as well as an eidetic memory. These talents are brought up in the interview and touted by his mentor, Hospital President Dr Glassman. Glassman advocates for hiring Shaun, "despite" his autism. Other interviewers worried that Shaun's lack of bedside manner would hinder the good qualities he has, as well as any unpredictable responses he might emit when in stressful situations, such as occur in surgery. By a close vote, Shaun is hired.

I've enjoyed the presentation of how an Autistic character functions in a stressful employment situation. Shaun's 'special interest' of course, is medicine, but over the course of the show, Shaun branches out and enjoys watching football games, makes a friend or two, and even has a romantic encounter with a female friend who values him for who he is.

The show presents a young man functioning in ways that are surely Autistic, but are in parallel with all other people who also function in stressful situations and come up with their own solutions. For example, when stressed, Shaun holds and manipulates a plastic knife his dead brother had given him. A female neuro-typical character twists her hair. Others go home and drink.

In an early episode, a fellow resident (Dr Claire Brown) and Shaun are attempting to solve a medical problem and as a colleague, Brown asks Shaun a series of questions. He never answers. After a while she noticed that Shaun does not answer questions but will respond if she makes a statement. She altered her communication style and they began to engage with each other. Just like neuro-typical people do.

In another episode, a friend visiting Shaun's apartment made note of the unusual configuration of his furniture and the eclectic mix of it. As a boy, Shaun had lived homeless for a while with his beloved brother in an abandoned school bus. He arranged his apartment furniture to mimic the layout of the bus. This comforted him and reminded him of home. The furniture itself was eclectic because different caring adults in his life at that time had given the items to him. The bookcase came from the local librarian, the bureau from a teacher, and so on. It comforted him to have these things around him and to remember their kindness. And don't neuro-typical folks arrange their furniture for maximum comfort and maintain keepsakes (usually photographs) to remind them of good times and nice people?

The show presents an autistic person functioning in society as a whole person. He is a bundle of quirks, eccentricities, attributes, and traits that make up a complex person, just like any other person. Sometimes Shaun is a jerk, not because he is autistic, but because he is acting like a jerk. Sometimes he makes accommodations on behalf of the society around him, and sometimes the people around him make accommodations on behalf of Shaun. What a refreshing way to show someone on the Spectrum.

Though both are medical dramas, I enjoy The Good Doctor much more than Doc Martin. Maybe in the future the television writers will have more characters like Shaun Murphy. Meanwhile, Doctor Ellingham? Some advice. You're too good for Louisa.

Posted by Elizabeth Prata at 8:36 AM 4 comments: Links to this post

Email ThisBlogThis!Share to TwitterShare to FacebookShare to Pinterest
Labels: autism

When winter arrives, the birds go away. Here in Georgia, there are a few that stay around, and I love that. There's always a chirp or two in the trees, a swoop or two across the yard. But for the most part, it's quiet.

When spring arrives, the birds come back in droves. They liven the yard.

We have many tall trees and some bushes in the yard, it's great for the birds. We have a tall oak, live oak, a 100 foot magnolia tree, pine trees, and a variety of shrubbery for birds to flit here and there and light upon them. We used to have more cardinals but I don't see them much these days. Same with the mourning doves. We have lots of mockingbirds and jays and crows. I enjoy the warblers. We have lots of songbirds abounding (unless those are the mockingbirds, lol).

Birds are a knitter of air
energizing the sky
Making the air sing,
bringing life to the trees
aeronautical dips and flutterings
done so beautifully with ease

At dawn I like to walk around the yard to see what I would see. The sky lightens with pink almost all the time. it's a rural area so the the stars shine brightly, dark on the ground but starry light above twinkles. The sun had come over the horizon and the day was barely lit. A large flock of cedar waxwings flew over my head and landed in the highest of the trees at the edge of the yard. The rising sun bounced off their their gold chests into and came away as burnished gold. They sat preening, content and singing as they brushed themselves.

Most of them were facing away from me, so even with the zoom lens I could not get a great shot of their faces, but look, just look, aren't they pretty? 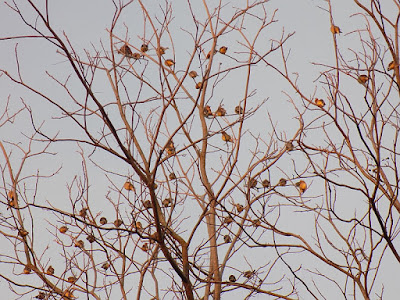 There were many more and a smaller flock came after a few minutes and settled in the next door tree, too. It was so fun to watch them. 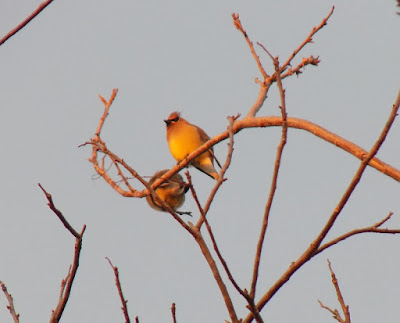 The Cedar Waxwing is a medium-sized, sleek bird with a large head, short neck, and short, wide bill. Waxwings have a crest that often lies flat and droops over the back of the head. The wings are broad and pointed, like a starling’s. The tail is fairly short and square-tipped. The red waxy tips to the wing feathers are not always easy to see. Cedar Waxwings are social birds that you’re likely to see in flocks year-round. All About Birds

Here is a highly zoomed and cropped photo showing the red waxy wingtips. The birds were about 200 feet away from me at the time: 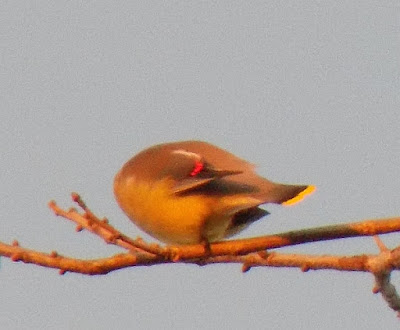 Well it was a treat. 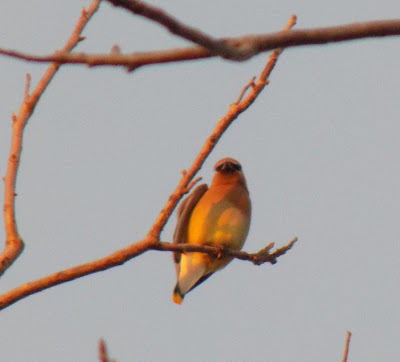 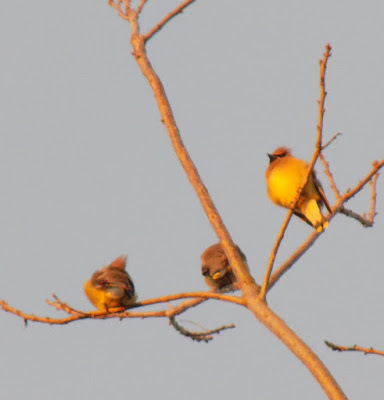 I hope you had a nice day, wherever you are. It was nice here in Georgia, but clouded over in the afternoon and it's been sprinkling on and off ever since. You know what they say, March showers bring...oh wait, that's not right. We do have flowers though, and some warming temps and most wonderful of all, birds!


Posted by Elizabeth Prata at 7:18 PM 4 comments: Links to this post

Spring has sprung in Georgia

I'm waking up with coffee and listening to the Nitty Gritty Dirt Band Will the Circle Be Unbroken Vol 2 on Youtube. I really enjoy Friday nights and Saturday mornings. It's cool out which is great, and only supposed to get up to the mid 60s today, which is also great. We had a few days of hot weather (78-81 degrees) and I did not like that. I am not ready for it. Let Spring be Spring.

I took these photos the last week in February. Lovely flowers already- 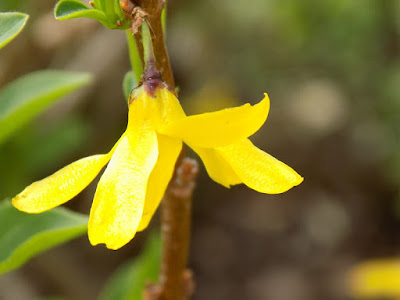 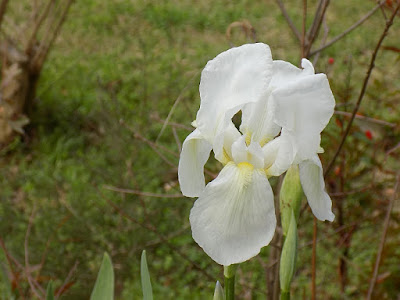 Today I plan to meet friends at a country restaurant for coffee/breakfast, and then head to the Library Used Book Sale, then perhaps to the Special Store to look for two items that captured my interest. If they are still available and priced accordingly, I will post later and show you :)

Enjoy your rest, your weekend, your moments of leisure, whenever they come and however long they last.

Posted by Elizabeth Prata at 7:27 AM No comments: Links to this post