When I drive to work in the morning, even in the dead of winter, there is so much to look at that's pretty. I pass pastures still a-blush with a vestige of green. Frost adorns the hay bales. Colts run in the frosty air, curls of smoke circling out from their nostrils. Cows braze placidly, with no flies buzzing, tails are still and quiet. There are sheep and donkeys and bright setting moons and stunning sunrises. In case I haven't mentioned it lately, it is very pretty here.

I love Hulu and Netflix, new-ish inventions. I remember television before cable, before color, even. Before remote controls. Having on-demand entertainment I can shape specifically for my tastes is a stupendous achievement. Really. Think about it.

I enjoy British television. I don't want to come across as a snob, but the BBC puts out better acted, better-written, and better quality programming than the US does, in my opinion. Also, it's quieter. I'm so bothered by noise that when the week before last Friday's busy week ended, and I came home and had a snack of potato chips, the chips were too loud in my head and I had to stop eating them.

I have enjoyed the following British police series:

Collision (5 episodes) and Broadchurch (8 episodes) were similar in that they had one season each, focused on a single event, in an emotional and complicated and demanding story arc. Collision focused on the police working a crash, discovering the originator of a multi-car pileup on the highway, and along the way discovering some murders and other crimes that the crash hid. Broadchurch focused on one murder and the cadre of characters directly involved. Both shows are excellent. Broadchurch has the advantage of being cinematically filmed in a gorgeous setting.

New Tricks features three veteran British cops of a certain age who have retired from the Metropolitan Police, and their middle aged leader. A new squad had been formed, an Unsolved and Open Case division, and these retirees were brought back to help solve them. They are old dogs. Hence the title New Tricks. There are 11 seasons of this show. The same characters remained with it until season 8. At the first episode of season 9 a main character left, and the next season two more of the original four departed. In my opinion the show has bright joy and whimsy for the first three seasons, and was good for the next three. 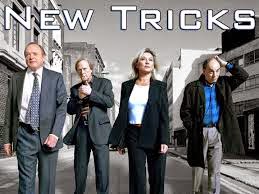 It is never announced explicitly but Alun Armstrong's character is autistic. (Or as the series describes him, "eccentric, socially inept, with OCD"). He is my favorite character. "I must have continuity!!!" LOL.

Line of Duty and Foyle's War are on an even higher plane than the first three. Look at the Wikipedia write-up for Line of Duty:


Line of Duty is a British police drama, created by Jed Mercurio, which aired on BBC Two 26 June 2012. The first series was BBC Two's best-performing drama series in 10 years, with a consolidated audience of 4.1 million viewers. The drama was recommissioned for a second series, and the first episode was broadcast on 12 February 2014. The second series achieved widespread public and critical acclaim, and, on 8 April 2014, the BBC commissioned two further series. In April 2014, Line of Duty was included in a list of the Top 50 BBC Two shows of all-time.

It is really good, haunting, complicated,and will keep you guessing. This time, the crimes are perpetrated by a cop, and the squad investigating is the Anti-Corruption Unit, the US equivalent to Internal Affairs.

Netflix kept putting Foyle's War in my 'you'll probably like' page so I caved in and watched it. I did like it. Thanks, creepy side of Netflix. Christopher Foyle investigates crimes in the seaside town of Hastings in England while WWII begins, reaches its climax, and ends. The series continues after the war but I don't recommend those episodes. The "war" Foyle was fighting was for justice for victimized British citizens at home while everyone's attention was obviously placed elsewhere. Michael Kitchen plays Foyle. You might remember him as the befuddled and nearly blind musician in "Enchanted April" lo those many years ago. 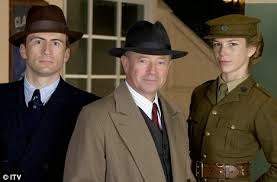 The war episodes of the series are filled with Foyle-wisdom, ethics, justice, compassion, and the whimsically named Honeysuckle Weeks as Foyle's driver. Despite being about the seriousness of war and murder the series has a light tone and the interplay between the original three main characters (Foyle, Weeks, and Anthony Howell as Assistant Detective Paul Milner) is tremendous. It's exceptionally well written. Each episode also subtly teaches about the war, as we learn true things about rationing books and hunger, radar testing, the Blitz, displaced children, war injuries, approaches to treating burn victims, and more. A lot of research and detail goes into each hour-and-a-half episode and it looks it. Highly recommended.

Sadly, I'm done with Foyle and New Tricks, and Line of Duty hasn't come on for a third series yet.  Broadchurch and Collision were one-offs, they told one story and done. So I'm looking for another British show to adopt. I know I'll find one.
Posted by Elizabeth Prata at 5:52 PM 2 comments: Links to this post

I cropped my ice photos and did a few creative things to them. Here are some more from the storm last Tuesday. 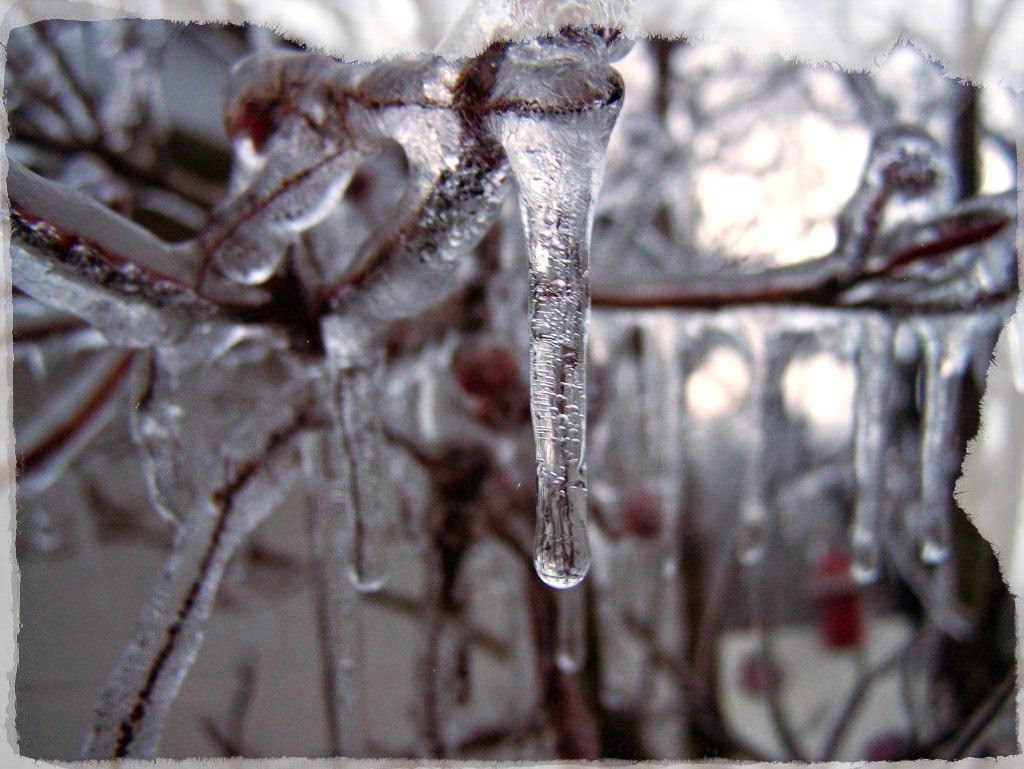 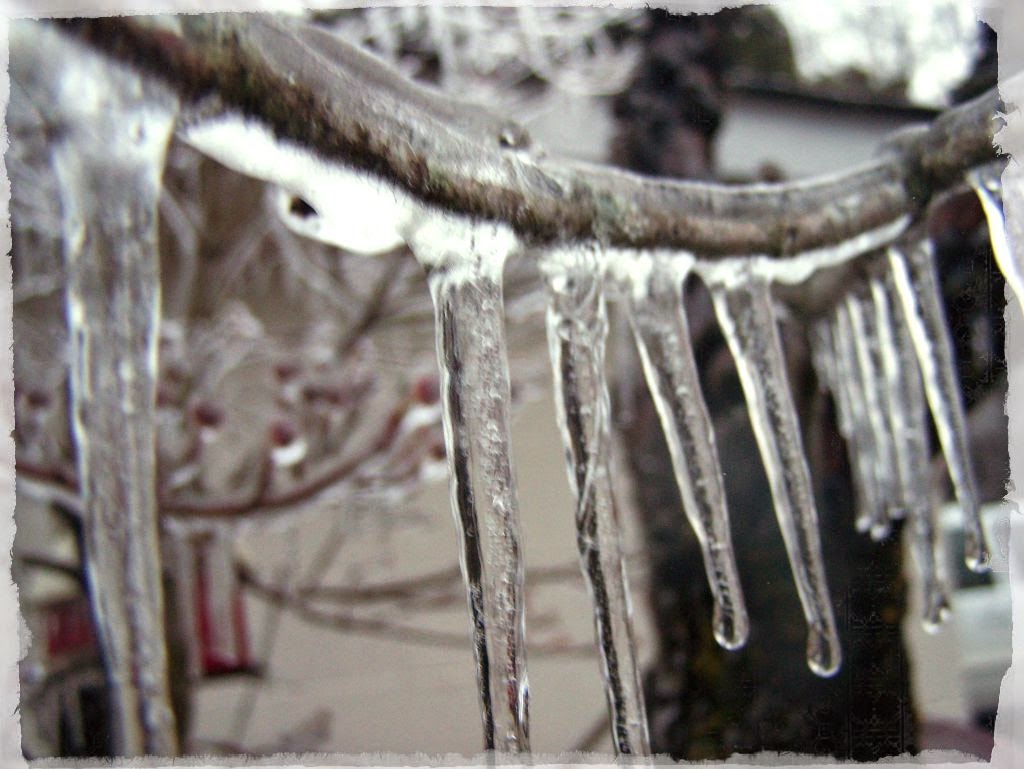 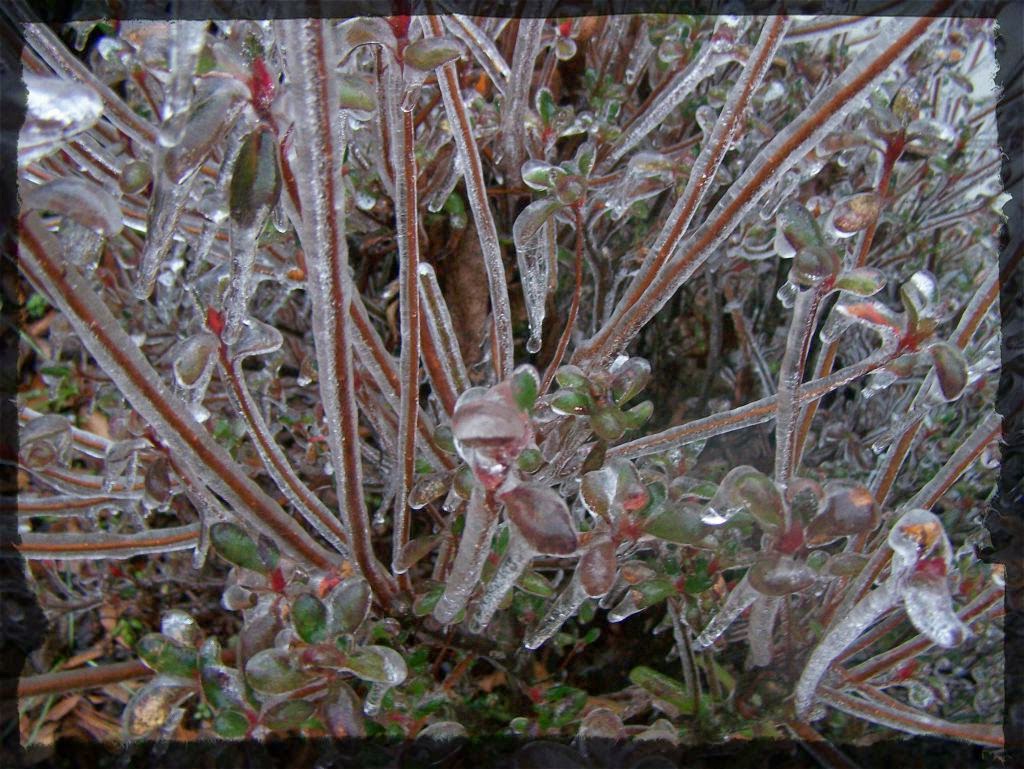 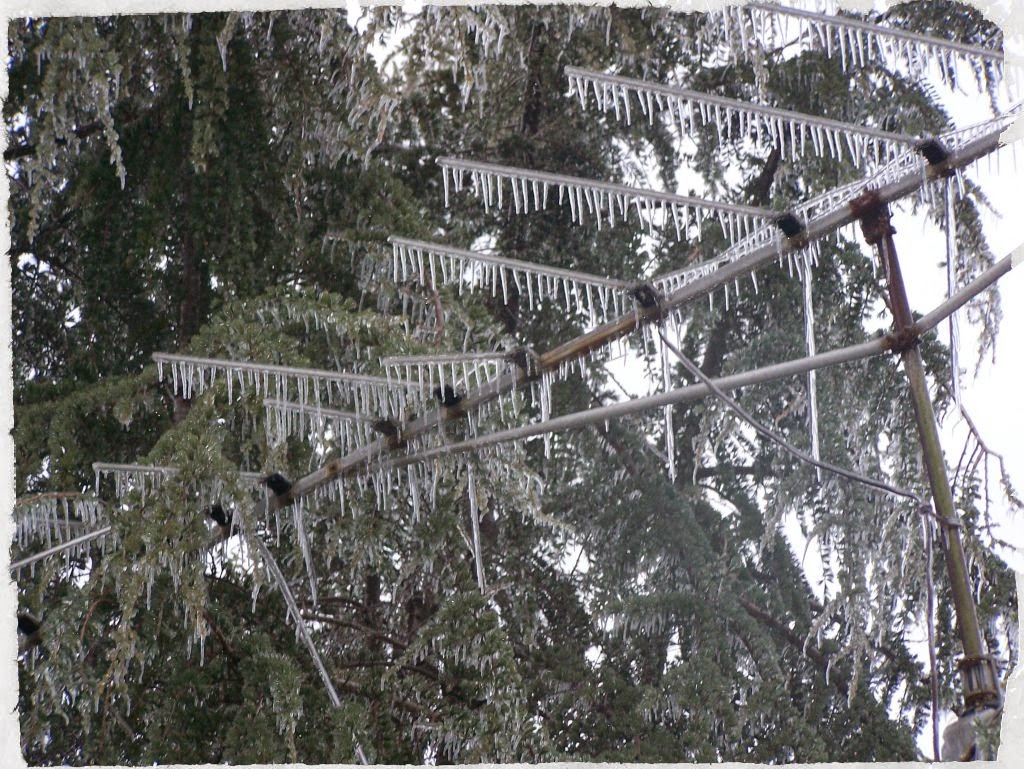 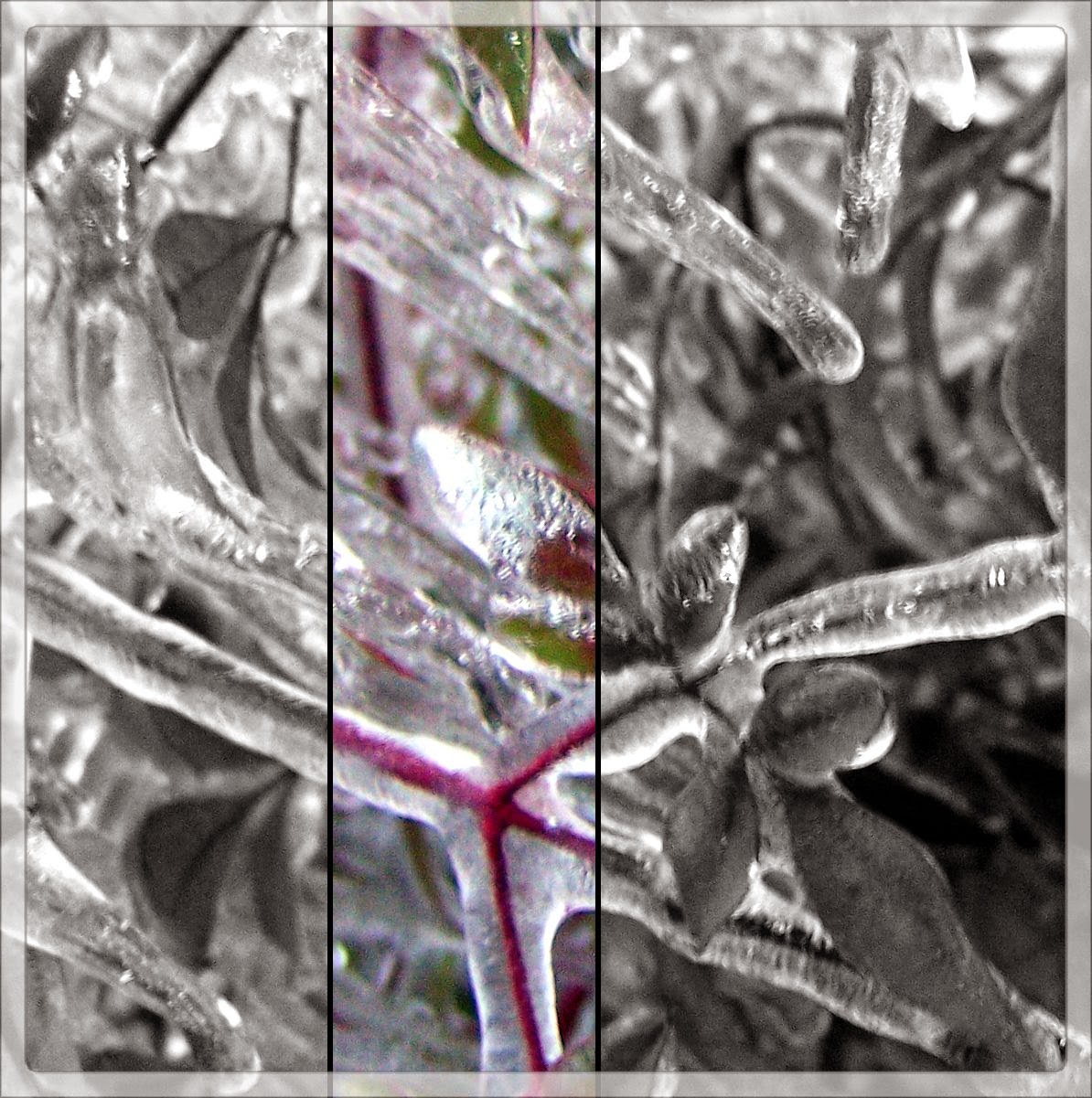 Posted by Elizabeth Prata at 1:29 PM No comments: Links to this post

Email ThisBlogThis!Share to TwitterShare to FacebookShare to Pinterest
Labels: ice

Ice storm and no school

Yesterday, Monday February 16, we had a cold rain which turned to a sleety-chilly ice pellets all night. Of course the trees and power lines were immediately blanketed with a thick coat of ice. At 10 PM the power went out.

So I dug out the kerosene lamp, trimmed the wick and filled the well. I got the flashlight out, inventoried the priority food in the fridge, and made sure I had all else ready in case. A few minutes later after preparations were complete it did go out. By then it was 10 pm and all I had to do is go to bed.

It was a restless night, with the creaking of overloaded branches hovering low over the roof. At 2:15am a nearby transformer blew. The light was white and bright like a mini-atomic bomb, and the noise, despite being at least a mile off, was very loud.

At that point the power had been out for 4 hours, and I decided that with a nearby transformer gone that it would be many more hours before it came back on. I got up and dumped out sheets and towels from a plastic bin stored in the bedroom closet, and loaded all the prepared food I had in the fridge such as quiche and potato soup etc, plus all the dairy. I tucked it outside the door. Temperatures were hovering just at freezing and the bin being nestled against the wall with the residual interior heat coming out, I knew that the food would not freeze.

At 10:30am the power clicked back on. At one point, 180,000 were without, mainly Atlanta and NE GA, where I am. There are still many without power but with the ice falling off the branches I hope the worst is over. We had no school today due to the fact that one school had no power and many secondary roads were filled with downed power lines and branches, making safe transport of children difficult.

I walked around the yard this morning and took some pictures. Here they are. 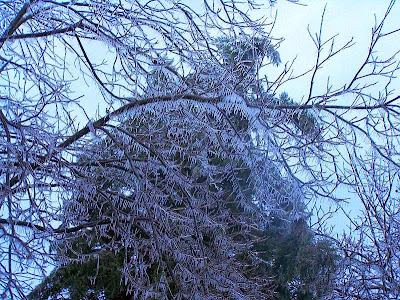 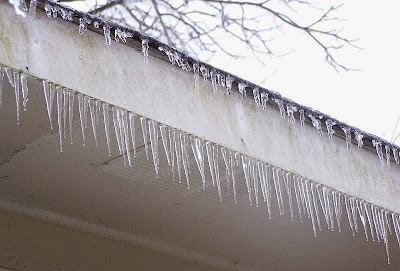 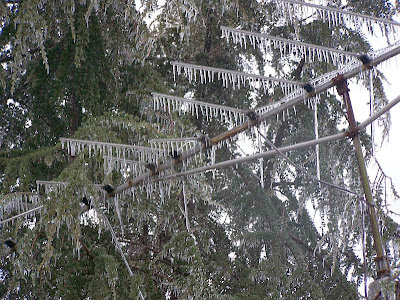 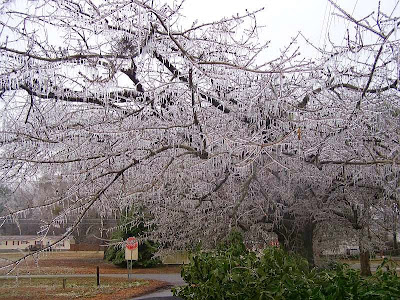 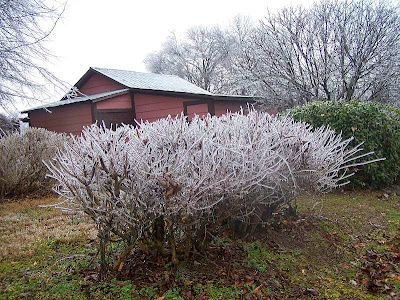 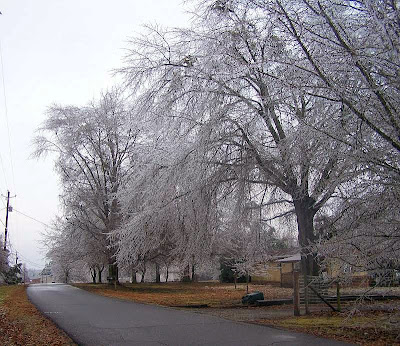 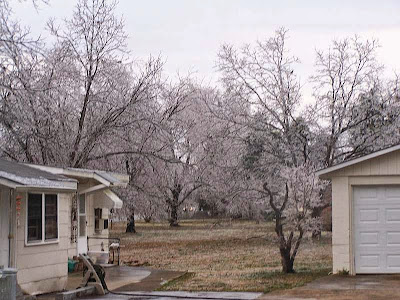 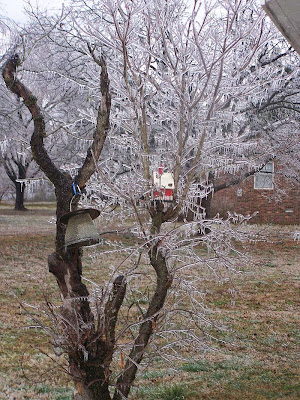 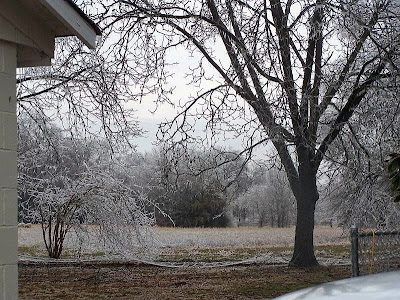 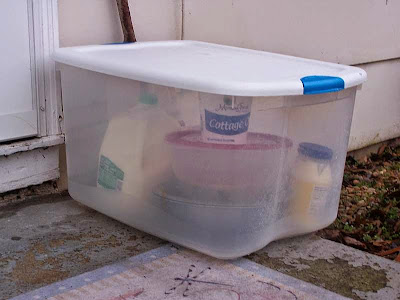 Sunrise over the bouncy house

This morning I detailed the kitchen. Scrubbed the sink drains, washed the stove top, bleached the countertops, and cleaned the microwave.

My microwave sits atop the fridge, due to space issues. I can reach inside to place an item to be heated, but I can't see into it. It is above my head. It's very heavy to bring down off the fridge to clean is so that means I don't clean it as often as I should. Ugh, dried food.

I used this Life Hack and it worked great.

Use a Lemon to Make Cleaning the Microwave Easy


The process here just requires a lemon, a microwave-safe bowl, and a dry towel:

Pour water in the bowl: Measure about a half cup of water into the bowl.

Wipe the microwave clean: Open the door and carefully remove the bowl with the lemons. If your microwave has a turntable, lift it out and wipe it clean. Wipe the inside of the microwave clean starting with the ceiling and the sides. Finish with the floor, sweeping any crumbs into your hand. Don't forget the door!

Cleaning stubborn spots: If you come across stubborn spots that won't easily wipe away, dip the corner of your dishtowel in the lemon-water and scrub until the spot comes away.


It wasn't quite that easy, but it was almost. My microwave was pretty dirty so if you clean yours regularly, using this recipe will be a breeze.

Then I prepared a cantaloupe, strawberries and three grapefruits.

A friend told me you can freeze cantaloupe. This was good news to me because I can't eat an entire cantaloupe before it goes bad, unless I obsessively make smoothies. It was on sale for $1 though so I bought it. After learning that freezing does the cantaloupe no harm (except a slight mushiness when thawing) I froze half of it after cutting into cubes. The frozen ones will go in future smoothies. The fresh I'll just eat raw.

The 3 grapefruits were on sale for $1 so I bought them and cut them up. The same with the strawberries, they were on sale too. Yum, cantaloupe-strawberry smoothies for dessert tonight after dinner.

Tomorrow I'll make broccoli-cheese quiche, potato mushroom soup, and pineapple sour cream muffins to go along with the fruit, to complete the week's ready-made food for dinners and lunches.

The wind is whipping, presaging a weather change. It has been a warm week here, and the birds are back. I love their dawn chorus. However we are now enduring plummeting temps and some snow apparently, is coming for Monday. And sleet. Maybe no school? We'll see.

This time of year is prime time for sunrises. It's fantastic to see the sun peeking over the horizon at the end of my driveway, it pops above the horizon a few miles later at the canola field at Gholston Stand, and turns red stripes the rest of the way to school. It takes me 12 minutes to get there and it's a great drive when I'm treated to sunrises like this every day:
All is well at Casa Prata. The boy next door is having a birthday party and a bouncy house in the yard is home to joyous kids flinging themselves all over the interior. The sheep in the pasture are staring through the fence, perplexed. My cats are snoozing on the couch across from the gas fire, which is ticking and burbling to keep the apartment warm as the cooler air streams in and curls around the house. And I'm headed to the bed for an afternoon nap.