Today is the official opening of the local Farmer's Market. It has been open for a few weeks but today is the big opening. It's been warm here lately and it got me in mind to do some container gardening again.

I used to do a lot of container pots on my deck when I was in Maine. I actually spent a lot of time and money arranging my outdoor habitation, which is funny, because it is so cold for so much of the year. At my apartment on the second floor there was a deck off the living room. The landlords lived underneath me and used the patio under the deck like a gazebo for shade. I liked the sun so I made use of the outdoor space. I bought plants in their pots at a good garden store. But all the furniture came from the dump. We had a good dump and you were allowed to pick. The table, the folding trellis, the wicker chair, wicker table, barrel, and the plant holders all were dump-picked. The plants were expensive enough! I bought them all full grown and the pots too. 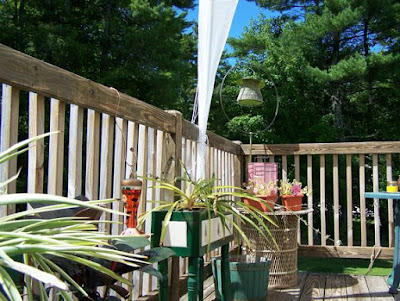 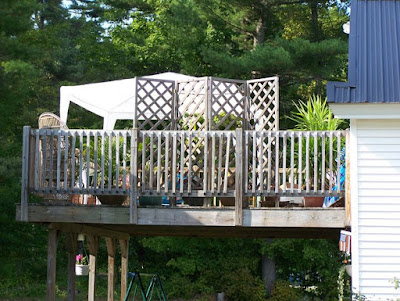 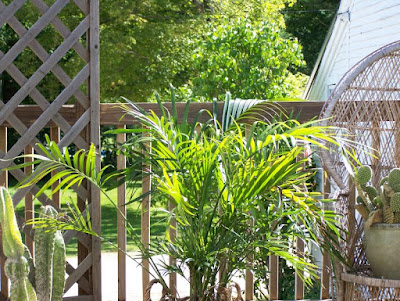 Then I moved to Georgia and my apartment was again on the second floor. The deck was not as large as the deck in Maine but it was solid and new and I decorated it with plants. 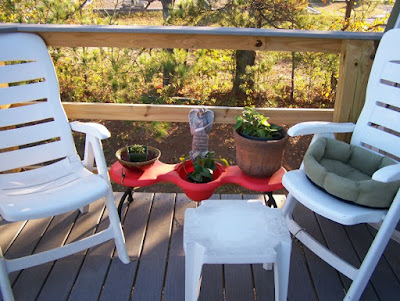 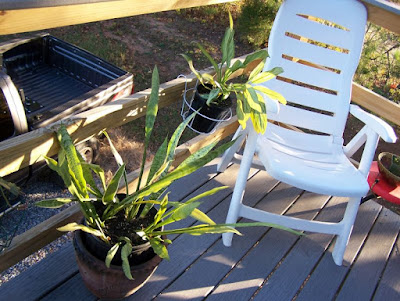 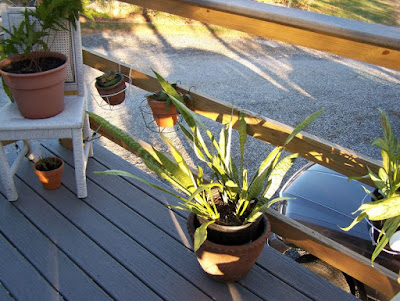 And even the lobby and the very steep stairs coming up- 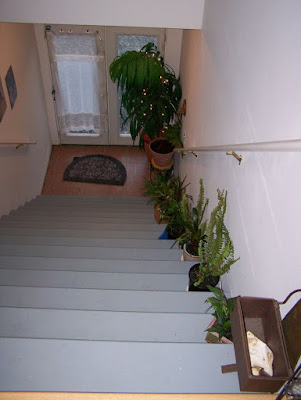 After about a year, I moved to the apartment I've been in now for nearly 9 years. There is no deck but there is a patio. I am on the first floor. However, I lost interest. I think it's because there were so many pretty bushes and flowers all around. 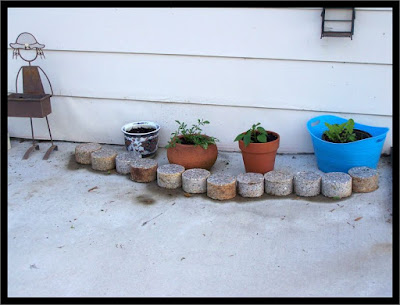 After a few years of just not doing much with potted plants, I am getting the urge again. I made a big change outside. A big change. I moved the table. That's right, you heard me. I moved it from between the ell to just in front of my door. In so doing, it hides the pots which had been lined up along the front wall, so I moved them out along the curve of the walkway. It nicely defines the space. 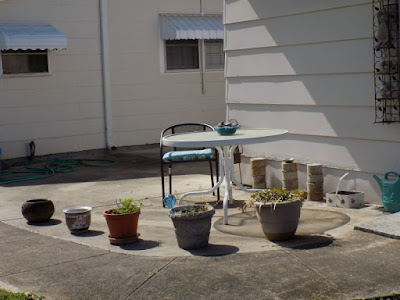 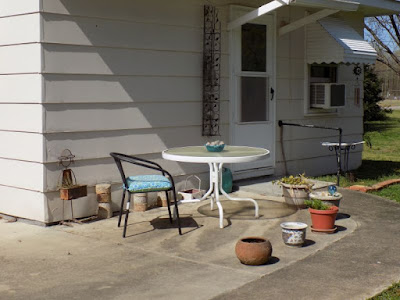 My plan is to get soil and seeds weekend after next when the threat of frost is all gone, and plant. We'll see how it goes. It might be too awkward to have the plants there or it might work out. I know I like the table and chair in that spot because it gets more sun. It's kind of hard to dress up concrete but I'll do my best!

Posted by Elizabeth Prata at 12:10 PM 5 comments: Links to this post

I did some cooking today since I was too sick and tired to prepare the Bountiful Basket goodies on Saturday or Sunday. And though I went to school Monday I barely made it home, I was so sick by the end of the day. I'm home today, Tuesday, but I have more energy today than I did then. At least for the moment.

In cooking today, didn't use all of the eggplant we received in the Basket even though I made four trays of baked eggplant. Bountiful Baskets really IS bountiful. I got 2 eggplants and my friend gave me her two. The tomatoes were also from Bountiful Baskets. I didn't use all my spinach depicted in the photo. And I did not photograph the roasted broccoli I made today as well.

This is stale bread, patted with olive oil and sprinkled with salt and Italian seasonings, and baked. I'll put the eggplant on it for bruschetta later. 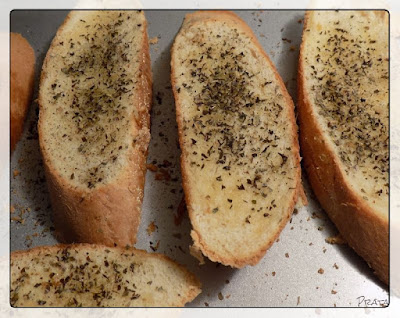 This is spinach, quick sauteed with oil and salt, and will remain in a container until I decide how to eat it. It can be eaten as a side dish just like this, or put in a pita pocket with black olives and feta and toasted, or thrown in spaghetti with some parmesan. I kept back some fresh spinach for a salad. I love spinach salad. 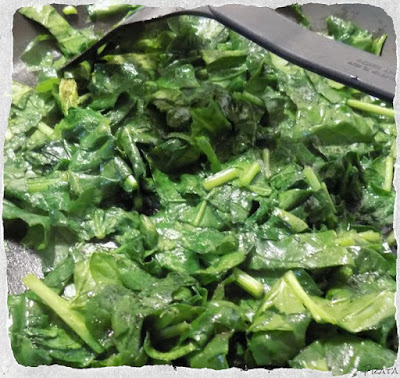 This is Brussels sprouts roasted till crispy. I quartered them since they were large, if they are smaller I usually just halve them. I put them in a Ziploc with olive oil and salt and pepper and tossed. Then spread in one layer in a good baking dish  and roast till golden. 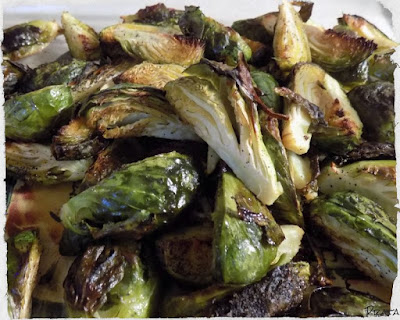 Eggplant rounds with tomato slices on top, salted and sprinkled with Italian seasonings. I roasted them till soft, and then broiled it at the end. Of course I had to test one. 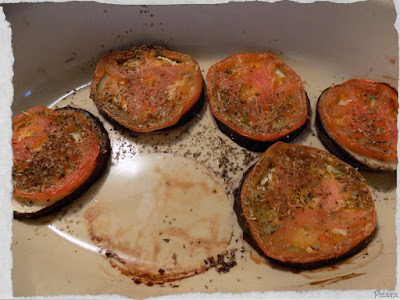 The weather has warmed up nicely, it was 70 degrees today, and sunny. I didn't go out except to do laundry in the detached garage, but my walk to and from the washing machine was nice, lol. There is a ton of birds now, they make a racket when they return in the spring. They're chirping and fighting and darting and swooping and generally having a grand time. So are the cats, running from window to window to glare at them when they perch on the inside of the window awnings.

Soon it will be too hot to cook root vegetables and I'll be making light fruit salads and sun tea. And the cycle of seasons continues.

Posted by Elizabeth Prata at 8:27 PM 2 comments: Links to this post