I rescued two kittens yesterday. Goodness knows how three indoor cats and me will live in a two-room studio apartment...and will Abby ever get used to her new brothers? All she has been doing for 12 hours is spit and hiss. The kitties were raised in a vet office so they are unfazed at any animal, so I am hopeful that as the new ones continue to ignore her that eventually Abby will learn to share her space. Luke and Bert are 10 weeks old. 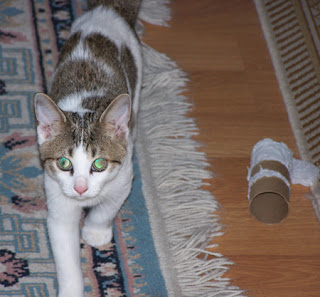 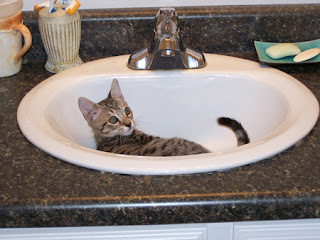 Posted by Elizabeth Prata at 8:50 AM 2 comments: Links to this post

More about my family

Left to right, at my first birthday party, my father's sister Norma, my mother's mother, my paternal grandmother Viola Bernardoni Prata, her sister Lena, another woman who wishes to remain anonymous, and my great-aunt Nellie. 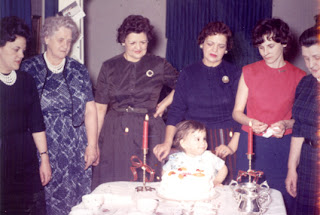 "Last year was the 100th year for Prata Funeral Homes which Great Grandfather Raffaele established in 1906. It was a storefront which had a desk and layout equipment. All wakes and funeral were held in houses then. He was the first funeral director in RI to build a funeral home from the ground up - in West Warwick."

"My Grandfather built four funeral homes. I eventually expanded the number to 9 then consolidated a couple to net out at 7."

"Your great grandmother Vittoria (Giannetti) Bernardoni was a very intelligent woman. Came from Tuscany. She started a meat market, bought a 3 decker home and rented out two floors. She made enough money to buy her son Rico a brand new car for his 16th birthday!! She died quite young - diabetes. All the Carlotti's prospered - doctors, businessmen, lawyers etc." 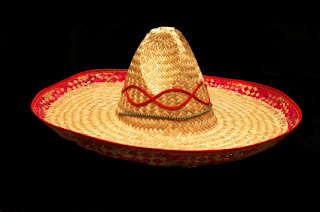 The airport at Athens GA is so small they call it a "Flight Center." One clerk, one counter, and not even a full length counter at that. One TSA agent, a dozen plastic seats in the waiting area, and a few 19-seat turbo prop planes sprinkled on the tarmac and there you have it.

Last night I was there with some friends who were picking up a friend. A 19-seater was just deplaning and entering the waiting area. It didn't take long for the few travelers to scatter, but there was one young man left behind who was walking around in circles. He was holding an oversize Mexican sombrero. I laughed and asked him, "Did you bring that all the way from Mexico?" He said yes.

"Well, that is a well-traveled hat. Now it's in Athens Georgia."

A look of shock crossed his face, and his mocha colored skin turned white, then green. With an accent, he said, "Athens?"

We three launched into action. I heard the tell-tale clatter of the shutter being brought down over the counter. I knew that there would be no hope once the clerk left. The small airport is devoid of taxis, is in an outlying area, and there is no hotel within walking distance. Taking him by the elbow we brought him and his now bathroom emerged girlfriend to the counter and explained the situation. The clerk said to us that it happens more frequently than one would think.

The Greeks call their country 'Grecia,' so 'Athens GA' might have made sense to the two youngsters from Mexico. I don't know. As we left, I glanced back and the view of two kids standing shoulder to shoulder and leg to leg, spines stiff but knees shaking, talking hurriedly to the clerk, haunts me now. Now I wish I had stayed with them until their flight was resolved. I would have taken them home and brought them the next day to whatever airport they needed to go. I think it's important that people know that no matter how lost they are in the world, they will always be found.
Posted by Elizabeth Prata at 7:17 AM 3 comments: Links to this post

Longing for the ocean 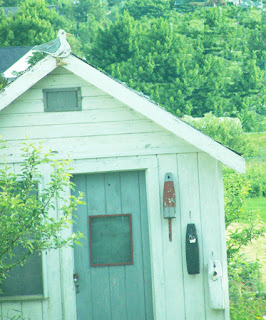 Posted by Elizabeth Prata at 2:56 PM 3 comments: Links to this post