I’ve mentioned that it’s rural around here. It’s really exquisite. After thirty years in Maine and seventeen in Rhode Island dealing with New England winters, I am experiencing a gentleness to the weather that is everything it’s cracked up to be. Yes, I know later it will be hot. It will be so hot that it will be like breathing an inferno. So hot you 'cain’t hardly move', or so I’ve been told by some locals. But last night it was warm enough to sleep with the window wide open, and I listened to the night sounds. They were plentiful. The sound of a train in the distance, horse knickers, cows lowing, an occasional bird, the heron, grumbling, and late- or early- in the morning, coyotes.

This morning it’s 63 degrees inside the apartment from having the window open all night. Not bad. March means it’s time to plant and I’ve got some morning glory seeds to strew around, and in April I’ll get some cactus in pots for the deck. Spring has sprung!
Posted by Elizabeth Prata at 8:30 AM 7 comments: Links to this post

sunset over the pasture
Posted by Elizabeth Prata at 8:40 PM 7 comments: Links to this post 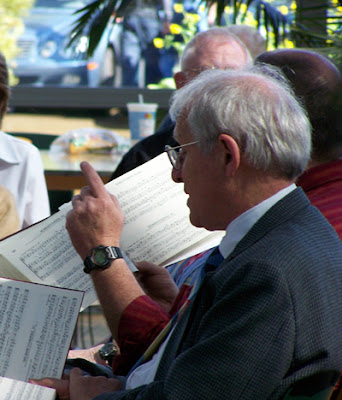 I went to brunch with friends and there was an Old Harp event going on in the atrium. The acoustics made the old, rural type of a capella singing sound just lovely. Old Harp singing, or shape note singing, is an American folk tradition (still vibrant in the rural south and in the mountains) of singing hymns and gospel songs from The Sacred Harp, a 150 year old songbook that uses shaped note heads to indicate position in the scale. It's participatory and seats are arranged in a hollow square. Wikipedia says: "Shape notes are a system of music notation designed to facilitate congregational singing. Shape notes of various kinds have been used for over two centuries in a variety of sacred music traditions practiced primarily in the Southern region of the United States."

The Sacred Harp is an oblong tunebook first published in 1844 by B.F. White and E. J. King. No harps, or instruments of any kind are used in shape note singing. 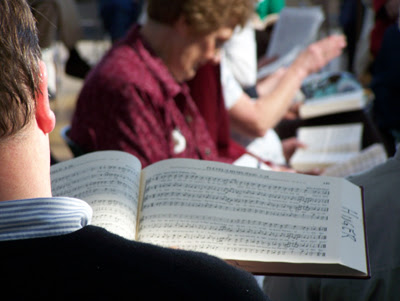 Posted by Elizabeth Prata at 6:11 PM No comments: Links to this post

I spent some time in Scotland a few years ago. The local controversy at the time was why listeners never hear a range of UK accents on the British Broadcasting Network (BBC). The entire UK is composed of people from England, Scotland, and Wales, with all their regional and local accents, yet, the debate went, listeners of BBC Radio and watchers of BBC news only heard the upper crust royal accent, which is certainly not reflective of the patchwork of people that make up a proud and diverse country.

My maternal grandparents were from Yorkshire, England, and I loved their accent, so gentle and broad, especially when singing me a lullaby or telling me a story. My fraternal grandparents were Italian, which is a musical language to begin with. Even when they argued it sounded nice. Growing up in Rhode Island meant that you sounded like a New York Brooklynite, except more harshly nasal. You really can tell a Rhode Islander when you hear one. When I got to college in central Maine, I felt too regionally identifiable so I worked at rubbing the edges off the worst of my RI accent.

Moving to Georgia from New England the first thing I noticed was the accent. I’ve been here a few months now and I’ve begun to pick up local differences. I think the Georgia accent is melodious. A local mechanic shop has on their parking lot bulletin board, “Stop in for tars,” a humorous acknowledgement of how people from North Georgia sound.

My thought process about accents came to coalescence when I was watching the movie “Facing the Giants” this weekend. Halfway through I noticed the main characters all had genuine Georgia accents. Then I thought about how we don’t hear accents in the media or movies here in the US either. If you do hear one, it’s faked, helped along with a hired voice coach, the accent dispensed with as soon as the movie’s done. Even the Atlanta newscasters sound like they could be from anywhere but here.

I think we are a diverse and proud country, as well, and we need to hear ourselves as ourselves. Hearing and seeing ourselves reflected as we are confirms differences but affirms worth. Who made the rule that we must only hear the Midwest accent and that no others are worthy of reaching the light of day? How harmful is vocal homogenization? Now I’m sorry I tried to homogenize myself by diminishing my RI accent. Though I’m sure my southern friends will tell me there’s plenty Yankee left in my voice! I think I’ll git me some tars and drink cawfee while I wait. Ayuh.
Posted by Elizabeth Prata at 10:39 AM 6 comments: Links to this post

My time is filling in. I’m going out socially, I’ve picked up three part time jobs, and I’m writing a book. The long days of nothing are coming to an end, my much-needed vacation now a distant memory.

I’m working for a nationally-known writer and it’s interesting to see the publishing world from inside her success. I’m learning a lot and taking notes for when it’s my turn. Hey, I like to envision the positive! My book, it’s about what it’s like to be the local editor of a newspaper in a politically contentious New England town. Names may be changed. Or not! It’s taking a lot of time just organizing my notes so I see this project taking at least another 18 months. I’m writing a column for the local weekly, and yesterday I got a job as correspondent for the local daily. I cover news and features in our county.

I really like writing about people. My first article was published in the daily newspaper this week. The woman in the story is elderly and in the nursing home, and misses her dog. The article was about her and her dog and the separation when folks have an emergency and can’t be with their pets anymore. I’m so happy her story got told. For next week I’m featuring a Habitat for Humanity family and also a feature on an area man with a neat hobby.

People around here invite each other out all the time. I was in a group of folks that included a new person to town. She and I hit it off. She invited me to a party at her cousin’s house, where I met another person who invited me to lunch Sunday. On the spot! In Gray, it seems to take years for anyone to say ‘Let’s go for coffee.’ It’s nice to have a social calendar again and it’s nice to meet new people. I can’t say enough how nice people are around here. Busy and happy, what could be better?
Posted by Elizabeth Prata at 7:44 AM 9 comments: Links to this post

I think it's a great idea to reduce, reuse, and recycle. In doing my part, I've saved all the I Can't Believe It's Not Butter tubs to reuse for leftovers. However, my recommendation is, when saving tubs, save a variety, that way, when you're looking for the leftover salad, you know which tub it's in.

?
Posted by Elizabeth Prata at 12:07 PM 5 comments: Links to this post 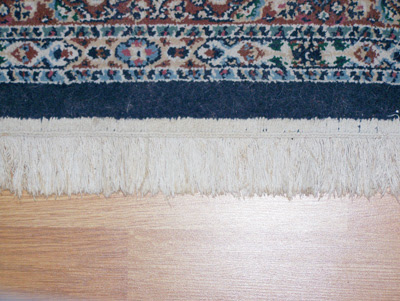 Yesterday, as I vacuumed my apartment, I found that if I used my upright Hoover in a methodical left-to-right pattern, I could get all the fringe at the ends of my area rugs to lay perfectly flat and straight. I was extremely pleased by this discovery.
Posted by Elizabeth Prata at 2:06 PM 4 comments: Links to this post