I hid in books. I dived into the pages and swam the great slip-stream of adventure and fiction and space and anywhere-but-here. When the cover attracted and the spine cracked and the pages turned, I wasn't here but there. I was lost for hours, becoming The Poky Little Puppy or Harriet the Spy or The Hobbit. I journeyed to the Magical Forest or descended 20,000 Leagues under the Sea or rocketed to the Stars. I learned To Build a Fire and To Kill a Mockingbird in The Crucible for The Once and Future King. I drifted into a Secret Garden and hopped on Watership Down and took The Stand.

Books transported. Books fired the imagination. Books sparked emotions. When they ended, left me bereft. Until the next one. My library card was wrinkled and the Librarians knew me. The card catalog was my friend. The marble entry was cool and the quietness was soothing and the orderliness of an entire world of worlds was cataloged and organized.

Sad that adulthood brings the gorging to a slow trickle. Sad that aging eyes can't focus for as long as they used to. But the books are there. Riding history with Miss Jane Pittman or enjoying a Nantucket Sleigh Ride with Moby Dick or learning The Body Dynamic and seeing Hearts on Fire...books are still good, they are still there. And when they are there, I am not here. 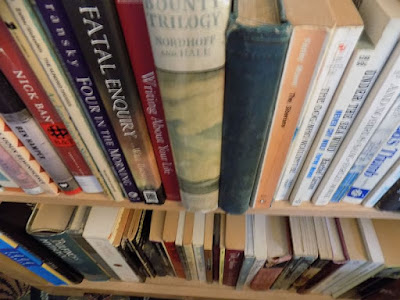 Posted by Elizabeth Prata at 9:01 PM No comments: Links to this post

Email ThisBlogThis!Share to TwitterShare to FacebookShare to Pinterest
Labels: reading

If you're like me, you struggle to stay within budget and maintain healthy fridge levels of fresh veggies, fruit, and proteins. Proteins especially are just so expensive. I'm talking about pork, steak, chicken, etc. We need a certain amount of protein each day in order to fuel our bodies appropriately, but buying enough to stay within financial limits is increasingly difficult as prices rise.

I live alone and this essay is aimed mostly at those who live alone or perhaps in a pair. I shop at Kroger. At Kroger, in almost every section, they have a small set-aside part where they put the marked down items. This is true for produce, cheese/cold deli, bakery, hot deli, flowers, gourmet/organic, and fish. One clerk told me that buyers like the marked down items and Kroger likes them because they hardly ever have to throw anything away. If you shop at a different store, I'd encourage you to search out if they also have a marked down/nearly expired section. If they don't, you could always ask them to start.

A while ago I discovered the fish section's marked down area. I do not eat meat, but I do enjoy fish. If anything, fish is even more expensive than meat! In the regular section of the fish cooler, Kroger has a pre-made ready for the grill skewer of medium to large shrimp. Five shrimp for $1. Five medium to large shrimp is a portion. I learned years ago that one protein portion should be about the size of your palm. Even more enjoyable, they are already de-veined. Ick, I hate deveining shrimp.

Here are my dinner proteins for the week: 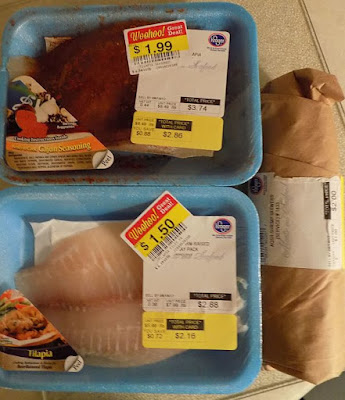 Any time you can get a protein serving for a dollar or less it's frugal.

I'll likely cut the plain tilapia into nuggets and lightly fry them, the other half I'll cook as a filet and serve with a salad. The seasoned tilapia will halved and sauted. Inside the brown paper package are the two skewers of shrimp. I ate one last night in Pad Thai, which consists of rice noodles, pea pods, tofu, lemon juice and shrimp covered in a Pad Thai tamarind sauce. The other skewer I'll saute and serve with rice and veggies.

For the protein during the rest of my day, I'll have quinoa-oatmeal in the morning, and there's tofu, eggs, chia seeds, peanut butter, nuts, and other kinds of proteins I can combine, like beans and rice, cottage cheese with fruit, etc.

You might wonder how I'll keep the fish fresh for 6 days when the common advice is to use it up within three. Well, the first 3 days I'll cook it as the evening comes. On day 3 I'll cook the rest and then eat the cooked versions as the other 3 days go by.

Now you know why this works for a single person. You can't do the same frugal shopping with a family, buying one filet at a time! When shopping for a family there are different skills and tricks to employ so as to stay within budget.

Now, I can't be this lucky every week. Sometimes the sale sections are picked over by the time I get there. Other times, things are on sale that are still too expensive for me, like lobster. Sometimes there are good reductions in price on items I just don't like to eat. Frugality can be tiring because it demands a constant vigilance and planning ahead. But the results are worth it.

Posted by Elizabeth Prata at 7:22 AM 2 comments: Links to this post

My mother had me tested: living with autism in the 1960s

Autism as a diagnosis has come a long way since 1908 when the word was first used, as the Timeline of the History of Autism shows. Further, the Timeline reveals that in 1944 and 1945, we learn from Leo Kanner that some of the behaviors associated with autism are "a powerful desire for aloneness" and "an obsessive insistence on persistent sameness" and from Hans Asperger that the boys he observed were "highly intelligent but had trouble with social interactions and specific obsessive interests."

Not many advances were made in the knowledge base until 1967, when Psychologist Bruno Bettelheim popularized the theory that "refrigerator mothers," as he termed them, caused autism by not loving their children enough. This turned out to be a false theory.

I was born in 1960 and I displayed the characteristics of the above. In addition, I had no affect (no facial expressions), didn't emotionally bond with people, displayed extreme aloofness, was selectively mute at different periods, "stubborn" (an attempt to control my environment so as to diminish anxiety I didn't know I had), perplexed by social cues, didn't understand emotions- mine or others', didn't want to be comforted, and was inter-relationally tactless. (i.e if someone looked terrible today, I'd say "You look terrible today.")

I know it must not have been that easy to engage with me.

The world was so scary and so confusing, I internalized it all. As a result, my body erupted with physical symptoms of the anxiety I was suppressing. I had headaches and stomachaches all the time, sometimes severe.

I was looking over my elementary school report cards the other night. It seems that every year in most 9-week segments, I'd have good attendance, missing only 1 or 2 days. But in one quarter of the school year, there was always a huge spike, where I'd miss 9, 10, 11 days. This is a lot of days in a school quarter that has only 9 weeks. That means I regularly missed one or two days of school per week that quarter.

In 1968 my mother had me tested. (I think I remember the date correctly). This was the time before autism was in the DSM and during the time the refrigerator mother theory was prevalent.

I remember going to doctor's offices and the person sitting in the big chair would try to get me to talk. Or observe me. I had many medical tests. The worst one was the spinal tap. A nurse held me in a Half-Nelson and another held my legs at the knees and they curved me and a HUGE needle went into my back. It hurt more than anything I'd ever experienced even to this day. I'll never forget being held down and the cold steel table under me and the confusion as to why this was happening.

After all that was over, I got curious and eventually I asked my mother why and what and how come.

My mother said the last part with such anger and disdain that she spit.

Psychosomatic means head-body (psycho-soma) connection. Psychosomatic disorders are physical symptoms that mask emotional distress. Unbenownst to the doctors at the time in our little corner of Rhode Island in 1968, the underlying cause was a different brain circuitry- autism. It is genetic and it tends to run in families. My cousin is autistic. I personally believe my father was also.

"In the field of psychosomatic medicine, the phrase "psychosomatic illness" is used more narrowly than it is within the general population. For example, in lay language, the term often encompasses illnesses with no physical basis at all, and even illnesses that are faked (malingering). In contrast, in contemporary psychosomatic medicine, the term is normally restricted to those illnesses that do have a clear physical basis, but where it is believed that psychological and mental factors also play a role." (source)

My parents interpreted the diagnosis as "hypochondria" meaning, not real, or the lay person interpretation of pychosomatic, meaning faked or malingering. They were kind of disgusted with me and left me alone after that.

At least I didn't receive the most common diagnosis before Autism was included in the DSM, schizophrenia. The doctor was kind of on the right track. My headaches and stomachaches were a real physical manifestation of something in my head, which we now know is different brain wiring. Anxiety and confusion and sensory overload caused my physical symptoms.

From Spectrum News, we read about my generation of autistic kids.


In the 1950s and 1960s, thousands of children who had autism were either completely missed or were saddled with the wrong label. The word 'autism' wasn't included in the "Diagnostic and Statistical Manual of Mental Disorders," the main reference book for psychiatry in the U.S., until 1980. …For these reasons, what autism looks like in older adulthood, and what it means to age with autism, are still mysteries, says Piven. "We don't have that concept with autism that people live a whole life: What happened to them as they got older? This is just a huge area of no knowledge. There’s almost nothing written about autism and geriatric populations."

Geriatric? Um, lol, OK. In my geriatric life, I've gained life experience that helps me cope. I have learned how to mimic appropriate social interaction. I have learned that people don't like it when your face shows no emotion. Apparently my resting face used to look very melancholy, and people would ask me all the time why I was sad. It drove me crazy. Over time I've learned what I need in order to protect myself emotionally, financially, professionally etc.

Not having an "official" diagnosis as a child was a definite disadvantage. It's OK, an official diagnosis didn't exist when I was a child. Even today, knowing what I do now but still not having an official certificate to "prove" why I seem rude or grumpy or aloof etc., is also a disadvantage. People still say hurtful things, even ones who should know better. One person said to my face they don't believe I'm autistic but just use the word to bully people.

I am who I am because God made me this way, and therefore I would not have it any other way. I have only spent 47 years with a semi-diagnosis and headaches and stomach-aches and angry parents and insensitive people. I will spend eternity with Jesus, glorified and perfected, being used as His servant in the exact ways He made me. The way He made me will be a gift to His society in heaven, without the physical manifestations from sensitivities and anxiety from misdiagnoses or misunderstandings. It's a good trade. A very good trade, because God is good.

Posted by Elizabeth Prata at 5:56 PM 2 comments: Links to this post