It once was lost. Now it's found 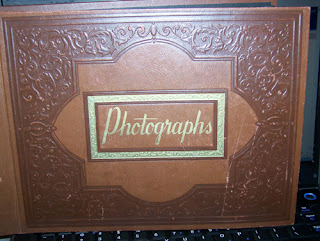 I recently posted about my day trip to a nearby town and antiquing for thrifty art finds. I wrote that I had found a neat photo album containing postcards and ephemera from the 1940s and '50s. Last night I dragged it out to start cutting up some of the things inside to use in a collage I was creating, and noticed that on one of the envelopes from a veteran's convalescent hospital was a clear address. The address was consistent, always from the same person to the same person on all the envelopes the owner had pasted inside.

Before I cut it up, I decided to find its former owner. It was a long shot, I know, depending on how old the letters' recipient was in 1944, they could long be gone. Or not.

Thanks to the wonders of the internet, I found the woman, still living in the same town in NC! And a relative was listed living with her, same age, so I surmise it is either her twin brother or a husband of coincidental age, which is 89. 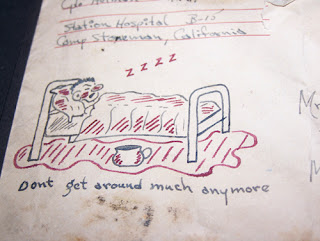 I am sending the photo album to her today, overnight express. I'll let you know how it goes!

Left, the cute artwork the convalescing soldier drew on one of his envelopes. He's really good.
Posted by Elizabeth Prata at 7:37 AM

Wow, that's incredibly exciting! Hope you'll blog if you hear anything back.