"All Gaul is divided into three parts, one of which the Belgae inhabit, the Aquitani another, those who in their own language are called Celts, in ours Gauls, the third."

This is my artwork of what that sentence looks like in my head. 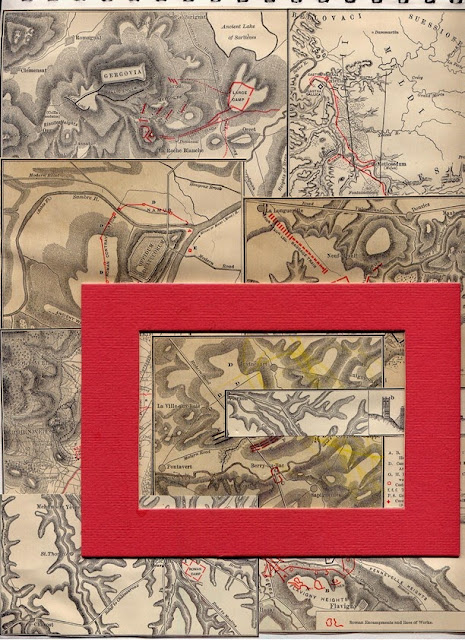 I took two years of Latin in High School, and I'm glad.

I don't think they offer Latin anymore at my HS but they still offer Spanish and French, which I also took. I think languages do a body good. But I think they ought to offer Latin. If you graduate Summa C-u-m Laude, then you will know what it means.
Posted by Elizabeth Prata at 3:19 PM


Hi Elizabeth,
Thank you for revealing a little more of you fascinating history. Well I decided to comment on your other blog!

I agree with you, Latin should be offered in schools. Not only to understand the history of their roots, but also their own language, how it functions, different borrowing of vocabulary throughout the wars and conquests.

I studied Latin for 3 years, was an altar boy, recited every morning the mass in Latin; that was in the late 40s and early 50s.

I was born for grammar as a teacher friend of mine used to say.

Now I am able to pass all that knowledge to my language students. They really like to delve deeper into European history and the development and changes in the language, why for instance there is an circumflex accent on certain words in French and Portuguese.

I just read part of your testimony. I had the same question for a long time, but knowing that you were a discreet lady who doesn´t like to talk about herself, I respected your privacy. I still think a personal testimony given is better than a testimony withheld.

I was very introverted when I was young, never opening up to anyone. But then the Lord changed all that when I was born again.

Of all the posts that I write, the most popular are those who relate the supernatural intervention of the Lord in my life and the Bible studies that help people grow and being edified by certain particular scriptures that have helped on the way.

Have a happy and blessed day.
Jean-Louis.

Thank you for your kind words! Yes, you do have a facility with languages, it is one of your many God-given talents and on top of that you honor it by working so hard. I agree, history of languages is so fascinating. I've studied it too, but only superficially. I often think of the moment at the Tower of Babel when suddenly no one understood anyone any more, lol.

I've studied French (1 year) Spanish (5 years) Latin (2 Years) and Italian (on and off for years). Once while staying in the Umbrian mountains, the reception for radio was bad so we used a short wave. It was so interesting to me that as we rolled the dial across the spectrum we heard languages from around the world. Most of them were so different from English we knew within that split second the needle passed over the dial number that it wasn't our language and we kept dialing. But one language always fooled us: German. It sounds so much like English at first we always stopped and listened for a second before we realized it wasn't ours! But I have never studied German.

“For at that time I will change the speech of the peoples to a pure speech, that all of them may call upon the name of the LORD and serve him with one accord.

While some interpret that to mean we will have purified lips like Isaiah had cleaned with the hot coal, other theologians think that means we will all speak the same language. If so, I wonder if it will be Hebrew...

Have a blessed day,
Elizabeth