Forty-four dollars, a new country, and a new life for the family

My great-grandfather Raffaele Prata came to America at age 28 on the ship Spartan Prince from Naples to Ellis Island. His home town was Roccamonfina, a comune (municipality) in the Province of Caserta in the Italian region Campania, located about 45m northwest of Naples. His listed profession was doctor, and he arrived with $44 in his pocket, significantly more than the others on his entry page, who were all laborers carrying only a few dollars. As a matter of fact, laborer was originally listed but it was crossed out and doctor written above it. He must have insisted. 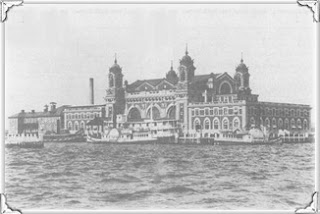 Below is a crop from the 1920 Providence RI census page. My great-grandfather Raffaele's profession is listed as embalmer by that point. He and his wife Giovaninna had 6 children, Julia the oldest, Anna, John (my grandfather), James, Rose, and Michael became naturalized in 1915. The family had started Prata Funeral Homes, by the time I was growing up there were 7 covering the state from Providence in the north to Westerly in the south.

I lived with my mother and my father above the Funeral Home for two years before we moved to the suburb of East Greenwich.

The flagship funeral home in the historic 1850s Providence building is now luxury condos. Of course.

Posted by Elizabeth Prata at 6:21 PM

Ok so even as a little girl you were going after a good scoop.

Ahhh now I get the bag of lime and two shovels in your trunk reference...the "Family".
Ski Kaminski

Love the autobiographical stuff, and that photo! Something scary definitely going on there. More! More!