Food Prep Dec 1-6: The crunchy part of the lasagna 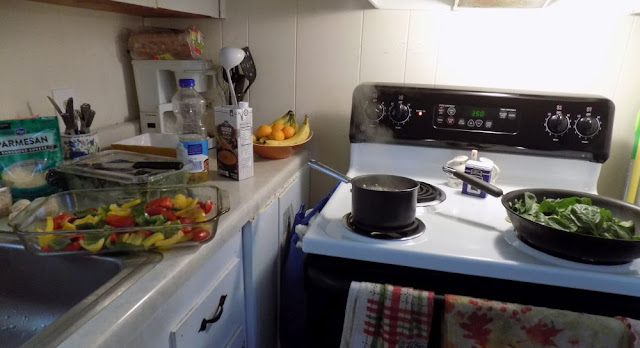 We've been blessed by warm temps and sunny skies, making it a bit hard to concentrate on the kitchen! But I persevered and came up with a penne-chicken casserole, roasted rainbow peppers, baked potatoes, roasted sweet potatoes, and baked salmon. I'll also make chicken veggie soup for lunches at work.

I'd mentioned that at my favorite vintage store I found a brand new small casserole dish. It's pretty, hadn't been used, thick, and a good size. Today I made penne-chicken casserole to go in it. I didn't make the roux as advised in the recipe which of course would make the whole thing yummy and creamy, because:

I've never been successful making a roux,
I am leery of using lactose free milk in recipes
I'm leery of even the small amount of flour needed to make a roux since I'm gluten-free
I was at the tail end and more than likely ruin the whole dish

So I just poured some chicken broth in it and stuck it in the oven. I used less cheese than called for due to the lactose intolerance thing, just adding some on top and not making layers of it. I'd also added spinach because I had a mountain of spinach to use up and besides, I like spinach. The penne is gluten free penne, corn based. It came out good, see: 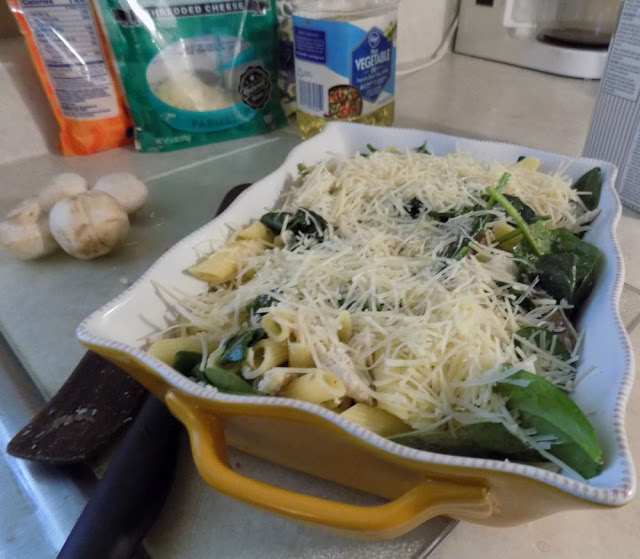 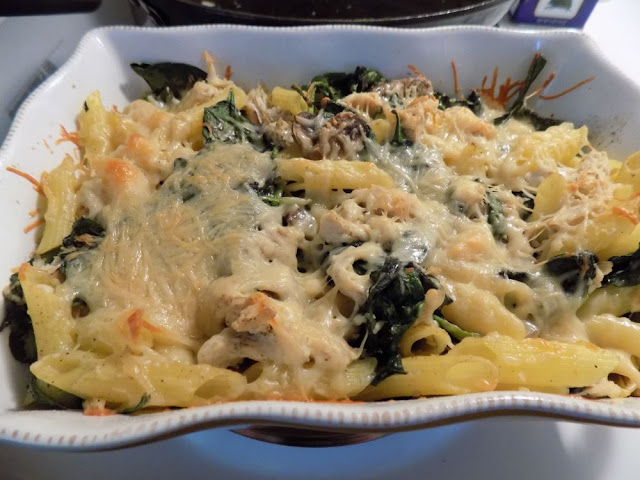 Massimo Bottura, acknowledged at the world's best chef, was featured on a Netflix anthology documentary of the world's greatest and most innovative chefs. "Chef's Table". His was the first episode in the first volume and I was spoiled after that. His meals were the only ones to ever bring both tears to my eyes and laughter to my lips. His deconstruction of the crunchy part of the Lasagna, called, "The Crunchy Part of the Lasagna," delighted me to no end. He is brilliant.

Anyway, back to my kitchen, utilitarian and clumsy as it is, produced some good looking food for my meals next week.

Rainbow Peppers (yellow, green, red)
Roasted green beans (can be eaten as is or added to a stir fry with tofu and sweet and sour sauce, or to quinoa I already cooked for a cold salad)
Baked potatoes (as is with milk free sour cream, or made into home fries for a side)
Roasted sweet potatoes (side dish or make eggs N hash and throw in some peppers)

I also bought peanuts, edamame nuts, and soy nuts for snacks and fiber.

There were some excellent sales going on at the grocery store, digital coupons. It takes some time Thursday night or during my Friday lunch to scour them in the online circular, but the savings can be good. I saved over $8 this grocery trip, but I ended up spending a little more at the outset to do so, that's the downside. For example, buy two 12-pack of seltzers, save 75 cents. I drink a lot of seltzer waters, my new choice for cold beverage, and usually only buy 1 12-pak, but since I regularly drink it and buy it each week, I got two.

Also, gluten free crackers were on sale. Normally massively expensive, they were half off at $1.99. So I bought three boxes.

The hard part about a limited budget is buying when the sales are going on to stock up for later. Making a larger outlay up front is sometimes not doable, but you do save in the long run. To make up for it I am going to try not food shopping next week, halving what I spent this week. We'll see.

Ok, the laundry's done and I have to make sure to go out to the garage and get it before dark. Household chores never end, do thy? I dislike them but to get through I try to make a game out of it and have fun. What do you do to get through the regularly occurring, mundane chores you have to do? :)


Posted by Elizabeth Prata at 6:56 AM