Lesley Stowe crackers, and other things

Summer is still good. I still love it. I don't get bored. It's endlessly interesting, wonderful, and relaxing.

It's been one month, and I have another month to go. School begins again on July 31. However, I do have two days upcoming which are dedicated to professional development, two half-day educational classes on July 17 and July 18.

I've been reading and exulting in Herman Melville's Moby Dick. I say exulting, because of the poetic language and the varied types of language, never mind the riveting story. All excited, I watched Ron Howard's 2015 movie In the Heart of the Sea, based on the true events that inspired Moby Dick- the wreck of the whaleship Essex which was stove in by an angry sperm whale. Half the story is the sinking, the other half is the survival in open boat for 90 days in the middle of the Pacific. The movie is also riveting. Moby Dick is THE Great American Novel.

I also started The Son, by Philipp Meyer. It's a television series now, or so I understand, but usually like the book better so I started there. As a McMurtry fan, and a fan of The American West in general, this one had me hooked at the opening line. It's a spare retelling of a fictional son of a scion family who was kidnapped by Indians and raised among them in their culture. It's early days but I like it a lot.

I also have been given a wonderful resource, the website of Dr Abner Chou of The Master's University is a profoundly insightful lecturer and I am going through Job with him. Here is his Expositors Wiki, with the following lectures available:
One thing I did which was to satisfy a goal on my list, was edit the 200 photos I took on my Church Pews & Pulpits Ramble, traveling over 120 miles in eastern rural Georgia to learn about the history of 7 historic and abandoned churches. It was great. I have tried to find a way to post multiple photos on Blogger, such as a slide show embedded within a post, but it's not possible as far as I have seen. So I will post a review of the trip with a link to my Flickr folder with the photos, tomorrow.

A family at church has a large garden, so you know what that means. They share and I'm a happy recipient. This past Sunday I got an eggplant, two yellow squashes, and a green pepper. I made a saute: as depicted. 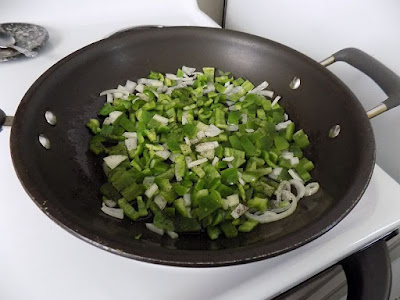 When the onions are golden and the peppers are soft, I added cubed eggplant, more salt and pepper, a bit more olive oil, and covered until eggplant were soft. 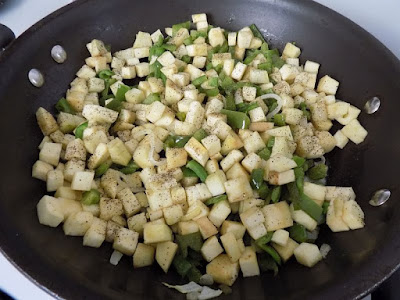 I use it as a sandwich filling, added to spaghetti or penne, or just as a warm salad on the side.

At Kroger grocery store I am always on the lookout for deals. There are a lot. One kind of deal is the WOO-HOO sticker. It alerts the shopper to an item that is about to expire or perhaps is being phased out. Usually, expired. I found these in an organic section the other day. I had never seen them before. I love crackers though so I took a chance. They are Lesley Stowe fig and kalamata olive cracker crisps. They were only 99 cents so, I figured it was worth a chance. 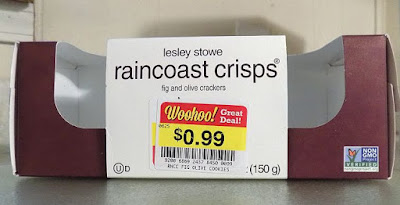 I LOVED them! Curious, I looked them up on Amazon in case I wanted to buy them in the future. I was astounded to learn they sell (depending on vendor) for between $10-30 per box! The next time I passed by Kroger, I bought three more boxes. If there are still more next time remaining on the shelf as there were yesterday, I'll buy more. Look for the woohoo sticker. It appears on just about anything, from milk and yogurt to produce bags (like shredded lettuce or spinach) to boxed non-perishables.

Another deal is produce in a red net bag. Any item in the bag costs 99 cents. Yesterday I got three red peppers. Since red peppers are usually $1 for one, or more than $1, these at 33 cents per pepper were a good deal. 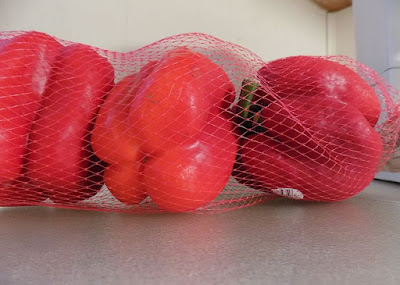 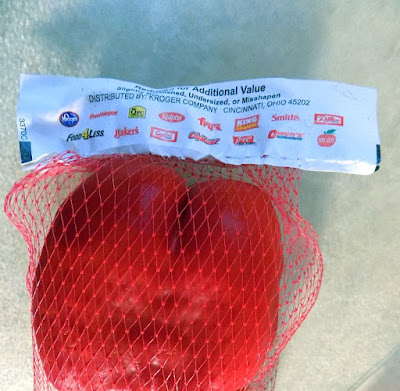 The peppers are fine, not wrinkled and no spots or mold. One time I saw the produce clerk loading up the spot where they put the bags, and I thanked her profusely for the ability to buy quality produce at a low price, She said, "It helps us too. We hardly ever have to throw anything away."

Another deal I'd gotten last week was three turnips. One, I simply peeled raw and cut up into matchsticks. I added matchstick carrots, and some lime juice and salt and made a salad out of it. The other two turnips, I peeled and cut into fries, tossed in oil, salt and pepper and baked. They got brown but didn't get crunchy like potato fries do. But they were still very good. Sorry I don't have an 'after' photo. 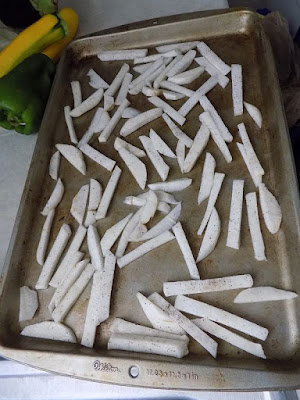 This weekend when I go shopping again I'll buy some cans of black beans and make a red pepper, green pepper, cilantro and black bean salad with avocado. It's filling, healthy and good.

This week I've enjoyed a visit from a returning college student who is attending The Master's University in CA, and attended an ice cream social at another friend's house. Just to prove I'm not a total recluse, lol.

Last night upon returning home I watched circling birds prepare to roost...enjoyed the cool night air and heard owls late in the wee hours...snuggled with my two cats, one at a time...watched cute clips on Youtube of babies escaping cribs or babies walking around with a bucket on their head, or kittens playing and so on.

I'm appreciative of everything the Lord has given me and grateful for everything He has not given me. Life is good.

Posted by Elizabeth Prata at 5:32 PM