In cleaning out my bookshelf I rediscovered an old project I'd done. It was from the 1999 Paper & Book Intensive, a long weekend of projects and instruction from Masters on all aspects of papermaking and book binding. It was held at the picturesque location of Haystack Mountain School of Crafts at Blue Hill, Maine.

Anyway, the class was led by Suzanne Moore, called "Still Life with Letters." The blurb had said, "This course will give students new possibilities for page, book, and cover design using letters as visual subject. Students will begin with traditional typographic and written letters, and by abstraction, invention, repetition, and manipulation create a series of unique designs appropriate for a variety of book applications. Unusual tools and a variety of coloring techniques will further expand the horizon."

You know how, on the cooking shows, the chefs or contestants will sometimes "deconstruct meat loaf" and the dish they come up with has vestiges of traditional meat loaf but will be modern and updated? That was what we were supposed to do with letters. Deconstruct them, make them a design element, where you couldn't necessarily see the letter it was, but you could tell it was a letter. 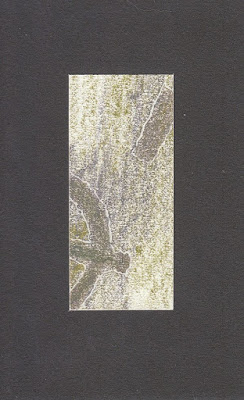 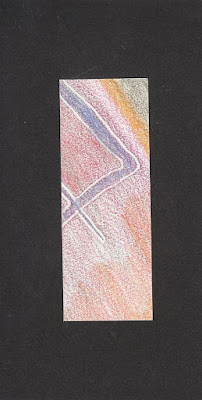 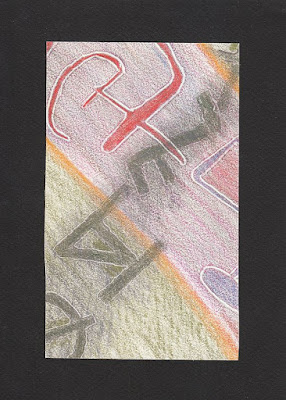 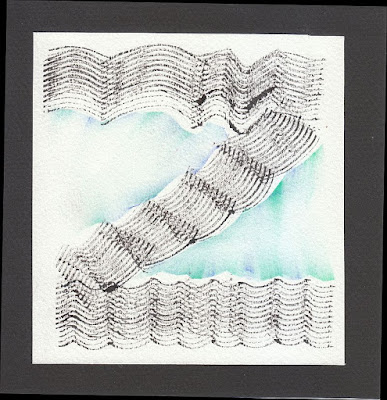 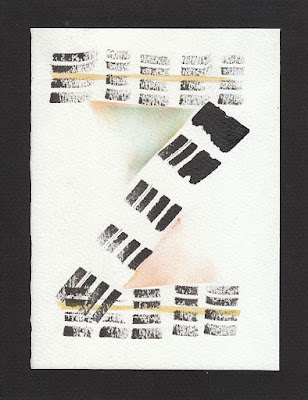 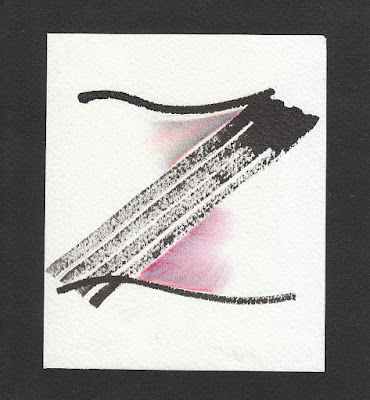 These aren't spectacular but they are good for me at my skill level. It's harder than one would think to deconstruct a letter but still keep vestiges of the letter. I think they are pretty. I should actually take them out of the envelope I'd made for them and use them in another project. That way I won't forget them for another nearly 20 years!

Posted by Elizabeth Prata at 1:23 PM

Email ThisBlogThis!Share to TwitterShare to FacebookShare to Pinterest
Labels: art

I like the second one from the bottom the best. Somehow, to my eye, the "Z" formation, with the delicate wavy top and bottom lines, and the bold, thick diagonal, with just a splash of rosy pink - and a little green - color (at least that's how my computer is showing it), just works. :)

Hey thanks, Carolyn! I was surprised at my light hand in the use of color. I don't know what the color is, watered down paint or colored pencil or what. I forget. But I like the light pink, too.

I re-set the comment moderation to email me when I have a comment. I sometimes don't realize how many days pass before I come back and check here. Thank you for being patient! I should get an alert right away now when someone comment, so I should be more timely in the future.

You're welcome. :) And no worries, I know you check the other blog far more frequently.

That one "Z" that I like should be part of some kind of art display on a wall of someone's home. It's elegant, well, at least I think so.