Hot this July? These two films will cool you off. Plus, medieval cats

After an unusually hot July, it's finally cooled down somewhat. By that I mean nights below 70 degrees and days that don't exceed 90.

I had a lovely morning today. It's interesting that during the summer my sleep schedule changes completely. I gravitate toward segmented sleep, which scientists tell us is normal and the practice of the ancients and medieval peoples bears out. Segmented sleep is you sleep when the sun goes down, going to bed at the normal time, say 9 pm. And you sleep for about four hours. And you wake up in the wee hours for two or three hours. The medieval folks used to pray, read, have sex, knit, or meditate quietly during the second wake time. Then they'd go back to sleep for a while.

I don't have the same hours but my sleep has broken into segments. I tend to go to bed between 11:30 and midnight. I sleep for about four hours. I wake up and write or read the bible. I return to bed around 7:00 for a few hours, then get up a final time. I take a half-hour to hour nap around 3. It all adds up to about 8 hours, just not all at once.

Last night I went to bed around 1:00, and this morning I rose at 6:00am. It is a cool and rainy morning, the first of both kinds we have had here for two months. There was rolling thunder in the distance and the soothing sound of raindrops on the tin awnings. I made coffee and had my first cup, but was still tired. The dark and wet day didn't help waken me, either, lol. So I returned to bed at 8:00 for two hours, listening to the rain and snoozing and reveling in the feeling of coziness with a sheet wrapped around me and a snoring cat at my feet. Lovely.

Speaking of cats, we all know the minute you take out the crafts, open the book, type on the laptop, they come around and walk all over everything. Well, it appears cats in the 14th century were just as pesky. See this from Smithsonian Magazine: 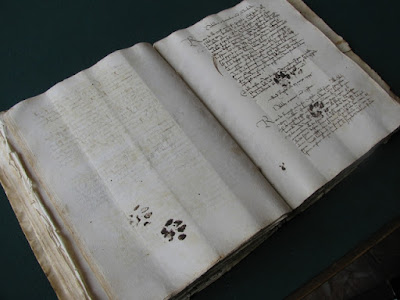 Centuries Ago, a Cat Walked Across This Medieval Manuscript


While pawing through a stack of medieval manuscripts from Dubrovnik, Croatia, University of Sarajevo doctoral student Emir O. Filipović stumbled upon a familiar set of splotches marring the centuries-old pages. Years ago, a mischievous kitty had left her ink-covered prints on the book. Filipović explains the finding:

Thanks to a frenzy of Twitter and blog coverage, a French historian picked up on the photo and decided to include it in her Interactive Album of Medieval Paleography so that other historians can utilize the unique finding, which gives insight into daily life in 14th century Dubrovnik. Filipović elaborates:


The photo of the cat paw prints represents one such situation which forces the historian to take his eyes from the text for a moment, to pause and to recreate in his mind the incident when a cat, presumably owned by the scribe, pounced first on the ink container and then on the book, branding it for the ensuing centuries. You can almost picture the writer shooing the cat in a panicky fashion while trying to remove it from his desk. Despite his best efforts the damage was already complete and there was nothing else he could have done but turn a new leaf and continue his job. In that way this little episode was ‘archived’ in history.

Cat lovers can relate, no? Here are my cat paws. They're Luke's. He is always following me. Where I am, there he is. And I wouldn't have it any other way: 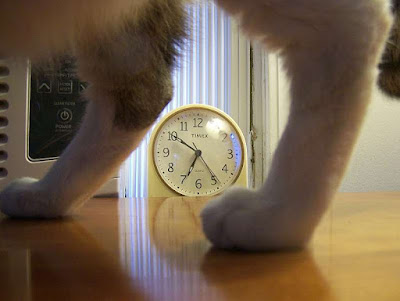 I watched an absolutely terrific documentary this week. "Antarctica: A Year On Ice". It follows the workers who remain on the United States' McMurdo Station (and several other international stations) throughout the winter on the coldest, harshest place on the planet, Antarctica.

When we see a documentary located on Antarctica it usually focuses on the scientists. However during the summer there are thousands of regular workers. There is a fire station with firemen, store cashiers, chefs, dishwashers, administrators, mechanics...they all work there to support the station and the scientists at their work.

You work 9 hour days, 6 days per week. When the cargo ship comes with supplies, you work 12 hour days every day until it's unloaded. You don't go to Antarctica to loll around with penguins and snowboard down ice mountains. You work.

The last flight out happens in mid-February and the 1200-strong retinue of workers dwindles to just a 200 or so. Those who "winter-over" look forward to no possible way off the continent, the worst weather in the world, and months of darkness. And they love it.

The filmographer who shot the documentary said it took ten years and thousands of dollars of ruined equipment to get it done. It was obviously a labor or love for him, in order to give us unfortunates a peek at what is the most astounding beauty an unique lifestyle anywhere on earth, that only a few thousand will ever see in person.

Plus, if you're hot, the scenery will definitely cool you down. Antarctica: A Year On Ice is available on Netflix.

Here is the official trailer


Another Antarctica documentary I truly enjoyed was March of the Penguins, narrated by Morgan Freeman. I can't believe this film is ten years old now. It remains fresh in my mind as the day its trailer came out. It follows a penguin colony for a full year, through the winter, and the adults find mates, produce eggs, protect the chick in brutal conditions, and seek food. The "March" refers to the march the females make over 1000 miles to the sea to eat and bring back food for the cold and tired husband. It's incredible.

The minute people hear "documentary" often their mind closes to the entertainment possibilities, but these two docs are very entertaining and easy on the brain, while still being stunning in scenery and filled with information about a place God has made which in large part has never had a human being to walk upon it.

Here is the official trailer.


The full film narrated by Morgan Freeman is on Youtube for free.

Thanks for the recommendations. Those documentaries look fantastic! Also loved the laugh about the medieval cat that meandered through some spilled ink (perhaps?) and then across the ancient manuscript. Totally like a cat to do that. Too funny!

Ok, so my husband and I just watched Antarctica. What a fascinating documentary! Thanks for recommending it!

Ohhh, I am so glad you watched it! That tickles me! Wasn't it so interesting! I only ever thought about the scientists, I never thought about the firehouse, the inventory warehouse, the station's store and its clerks, the cooks and cafeteria... I still think about that Russian guy, man, he seemed ready to go off the deep end! But I think the scenery was absolutely amazing. I read it took the documentarian ten years to film it.

It was interesting! We both really liked it. I never realized so many stations were there (McMurdo is like a city!), nor that people stayed year round! I found the asian woman's (store clerk) description of the aurora to be fascinating. I agree, the scenery was breathtaking. Admit I did get a little sad when that little baby seal was struggling and they said they don't interfere. I wanted to take the little thing in and give it a home.