Several years ago I began browsing in a small shop in my small town, a shop called The Shabby Chic Cottage. The ladies who owned it would acquire items from yard sales or estate sales, refinish them if they needed it, and then resell in their store. They had gorgeous items, everything from art to furniture to ceramic items, rugs linens, and everything in between.

I bought my first vintage bone china teacup there. The pattern from manufacturer Tuscan in Duchess pattern is described at Replacements.com says "Roses, Gray & Cream Bands, Gold Trim". It's fine English bone china, it's delicate, and it's pretty. I was hooked. I wrote about its acquisition here.

That was two years ago and sadly, shortly after, the shop closed. I was sad for the ladies but sad for me too. I had been bitten by a bug and no way to salve it. Then a friend told me of another shop, not as nicely arranged but prices were even better, and it wasn't far from me. I began haunting it and soon acquired over the last two years, 8 more china teacups and 3 more teapots.

As I went along in this quest, I had in mind THE teapot I wanted. I acquired the other three only because I was looking for THE one and they charmed me in the meantime. But in my mind, if you're sipping tea from a fine English bone china teacup, there should be a fine English bone china teapot it came from. And to me, an iconic English teapot is round, white background, with some kind of flowers as a motif. As you can see from my collection, I'm not married to the notion that this kind of teapot is the only kind of pot, as I've collected American and Japanese pots too. But a collection in my opinion would have the iconic English pot.

And it was that very one that escaped me for so long. Here are my teapots so far:

Tetsubin, which Wikipedia explains are "Japanese cast-iron kettles with a pouring spout, a lid, and a handle crossing over the top, used for boiling and pouring hot water for drinking purposes, such as for making tea." They are traditionally used to heat water or tea over a charcoal brazier. 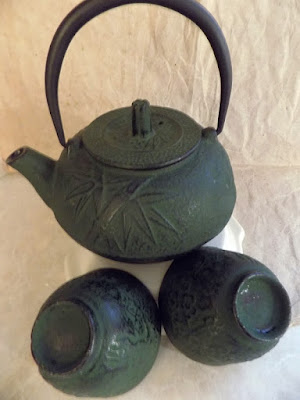 The folks at My Tea Ware say, "Kutani is a regional brand known for vibrant colors and intricate patterns of painting on porcelain. Kutani kilns are located in rural part of Ishikawa prefecture by the Japan sea."

This Japanese Kutani crackle porcelain teapot has all-over crazing under the clear glaze for a crackle design. The transfer design is an iris and bird motif with gold leaf on both sides and on the lid, with a bamboo or rattan handle. The color is an ivory or cream color. Kutani porcelains are characterized by their elaborate picture decorations in thick gold, red, blue and some other colors. In latter years I understand that these decorations were no longer hand painted but usually transferred by decal.

I am unsure of the date of the piece but it's likely late 1970s, early 1980s. This teapot and cup are not vintage but are extremely functional. The pot is the perfect size for three or four cups, it keeps the tea hot, and the design is growing on me more and more. It's the most useful and functional of all the teapots I own. 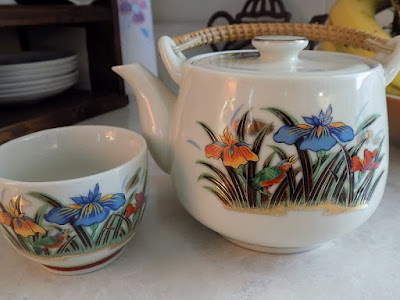 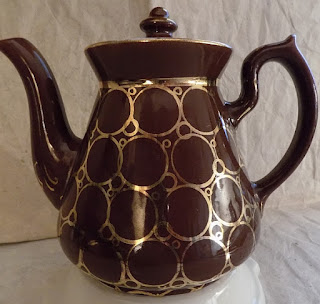 Due to the style of backstamp, the teapot was likely made in between 1915-1929. I think. It's so cool to think this pot is a hundred years old. There's a reason it looks so good for its age. According to eBay Hall teapot collecting tips,


"The innovative heir to The Hall China Company, Robert Taggart Hall, sought to devise a way to bring back the single-fire method, which was prominent during the Ming Dynasty. At the time, pottery producers used a two-step firing process, with the first to harden the piece and second to set the glaze. Working with the company's ceramic engineers and chemists, Hall and his team created a new glaze recipe for the single-fire process. The new process allowed for many vivid new colors, which were previously unseen, in United States pottery manufacture."

Here is the Whittard Clipper I received as a gift. It's an English pot. The ridge along the bottom is so that the pot would nest into a specially made pairing of a teacup. I broke the cup. The little 2-cup pot stands alone now. Whittard is an English company founded in 1886. My pot, however, is new. 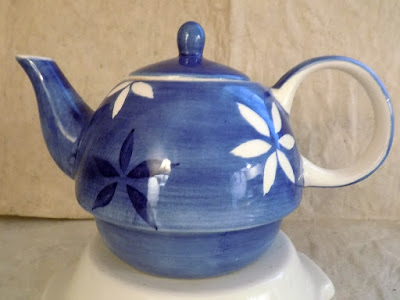 At The Special Store the other day I found another iconic teapot, this one is American. It's a Homer Laughlin, maker of the famous Fiesta ware and Riviera ware. This line is called Eggshell, and being thinner, it was a departure from the thicker and sturdier ware like the Fiesta introduced in the late 1920s.

The teapot I found was a mid-century style pot in Eggshell, Cavalier style and Spring Song pattern. It was actively sold between 1952-1959. SO mid-century! It's large, the largest pot I own. I really like mid-century modern styles, as long as the motifs aren't overdone with the outer space patterns of galaxies and stars and stuff. 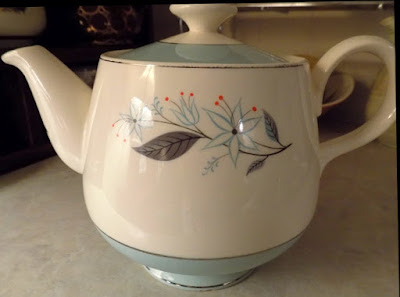 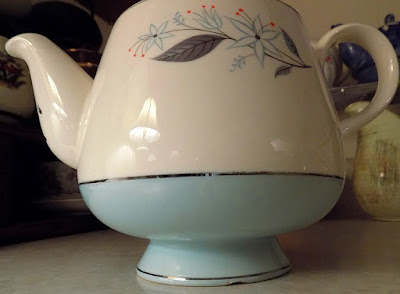 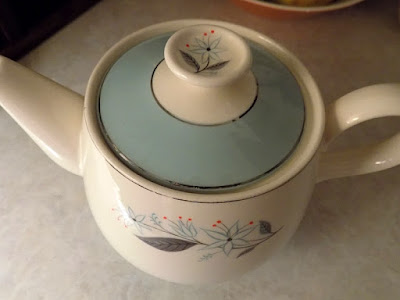 So I needed one more English pot, the iconic one I'd had in mind as the ideal. It would be made by a good manufacturer, white background, flower motif. Then I saw the photo the store had posted, I thought, 'Wow! PERFECT!' 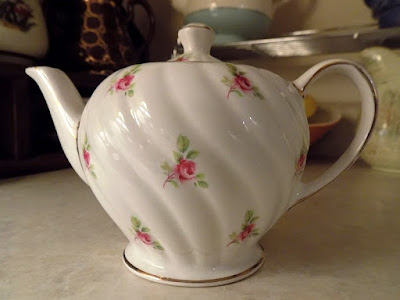 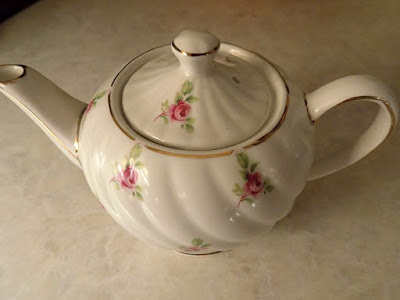 When I got to the store it was perfect, with one issue. It is a mini-teapot, a 1-cup. It holds 8 ounces. It's cute and lovely and charming and I bought it immediately. It is a Sadler mini-pot, Rosebud swirl pattern, gold edging. I had not known that Sadler teapots are highly collectible, and highly thought of in the China world. I just thought it was cute.

This completes the teapot collecting, and the teacup collecting too. I now have two American teapots, two English, and two Japanese pots. For cups, I have 9.


Posted by Elizabeth Prata at 1:21 PM

Your post is so timely, as I am looking to buy my first teapot! I've felt rather silly to be my age and know nothing about them or what I would like. After hours of looking online, I've realized my favorites are glass, though I'm concerned about breakage, not just of the pot itself by my clumsiness, but also of the handle, as that seems to happen sometimes unaccountably. I looked at cast iron sets like yours when I found them in my favorite color, but finally decided I like more delicate pots. Now I'm trying to figure out if I should get one with a diffuser. So many decisions! :)

I wish you luck in finding just the right style you enjoy! It has been a learning curve for me. There is more to it than meets the eye, as you discovered! But the fun is in searching and trying and learning.