We have had some warm days. It was so warm, a steady several weeks of in the 70s, that the tree in front of school began to blossom. 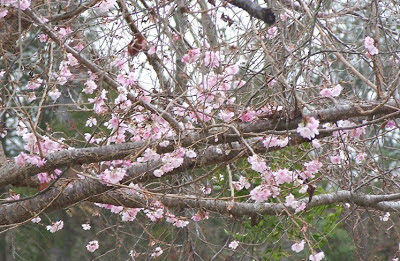 Since then, we had a few nights of frost, which likely killed the blossoms. But the days rebound to the upper 60s. This is why I love Georgia. Even when it's cold...it's not.

This morning I watched Cary Grant and Rosalind Russell in the newspaper yarn His Girl Friday. The repartee was hilarious. In one quick fire set of dialog, the newspaperman was summing up the murder's situation, saying that after the killer lost his job he hung around the park listening to 'soapbox spellbinders.' What a marvelous turn of phrase. I love good writing.

I've been taking it easy this morning. Cook and eat breakfast, watch a movie, do some chores, listen to a sermon, study a little. Easy does it. I wouldn't want to go too fast and startle my sensibilities and faint or something.

Now that I've cleaned out the fridge and washed all the dishes I think I'll cook something and mess up all the dishes again. Anyone feel like washing dishes is a pointless exercise?

Perhaps roasted vegetables will be on the docket, and maybe some kind of soup. What kind, I don't know yet.

But first, I'll pray for the families of the babies that were killed in Newtown yesterday.
Posted by Elizabeth Prata at 1:08 PM