My day so far, every gory detail

So the upcoming work week is school-free. The three days of Thanksgiving comprise the usual school break and the Monday and Tuesday are two additional no-pay days off that the state kindly foisted upon all school departments in a cost saving measure. They're called "furlough days." So I have the week off, but I don't get paid. But I have the week off! Might as well relax.

So this morning I went to the library and topped up on books. I renewed Bridge of Sighs by Richard Russo. The NY Times says "The big contours of “Bridge of Sighs” are richly evocative and beautifully wrought, delivered with deceptive ease." Isn't that just like NY Times Book Review language? LOL. I wonder how the little contours are. Anyway, I hadn't started the book yet so renewal was necessary.

Stealing Lumby, a little, light book, by Gail Fraser, the second in a series that features a small town with quirky characters and a small-town newspaper at the center of it. The first book in the series was Lumby Lines, the name of the paper. The series evokes Jan Karon's Mitford series, but not as well written. The covers even look the same. But I like them because I am hoping the writing will mature with the series and it is clean, light, and cute literature. I read these kind of books at school when I have a break.

Gone to Green, Christian fiction by Judy Christie.  Strangely, this paperback also has at center a successful big-city journalist, who never imagined ending up in the tiny town of Green, La. She never guessed that within months she would unexpectedly inherit a smalltown newspaper. Hmmm. (tongue firmly in cheek).

One Second After, a great book about the immediate aftermath of an Electro-Magnetic Pulse. It's an apocalyptic thriller like "On The Beach" but on steroids. Personally, I think a destructive EMP will be detonated over the US soon. I never forgot the opening scene in Whitley Strieber's Warday, published in 1984, depicting in detail what happens when all electronics are immediately rendered neutralized. Twenty-five years after Warday was published, our dependance on electronics has only grown exponentially and shat means, so has our vulnerability. I'm looking forward to reading One Second After, depicting the EMP but in more modern terms.

And yes, it's come to this, John Grisham's "The Associate." Washington Post reviewer says In 2005, as part of an Alcoholics Anonymous recovery program, a Las Vegas man wrote letters of apology to people he might have harmed in his drinking days. One letter went to a woman who in 1984 had claimed that he raped her at a fraternity party when they were students at the University of Virginia, only to have her charges dismissed by police and school officials. But given the man's admission in his letter, the woman called police, and he was charged with rape; after plea bargaining, he served six months in a Virginia prison for a lesser offense. The case was extensively reported in Charlottesville, where the novelist John Grisham now lives, and he has made a fictional version of it central to "The Associate," his 21st novel."

As for legal thrillers, I love 'em. In my twenties I read "The Trial of Socrates" by I.F. Stone, then later in my thirties complicated legal non-fiction like "One L" by Scott Turow,  "A Civil Action" by Jonathan Harr, "And The Sea Will Tell" by Vincent Bugliosi. And now in my forties, Grisham. I shudder to see what my brain will be like in my fifties...lol. 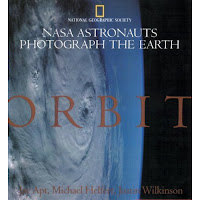 Next on the reading stack is "Orbit, NASA Astronauts photograph the earth". When my eyes get too tired at night to read or computerize, but don't want to watch tv, I like a big, pretty coffee table book. The photos are wonderful in this book, and I have always enjoyed looking at aerial, topo, or satellite maps. The last coffee table book I checked out was "Titanic: the last great images".

Then I headed to the Marketplace, a small grocery store serving Danielsville. They have good prices and I only needed a few items. I got a dozen eggs, sour cream, an 8 lb sack of russet potatoes, margarine, a banana, scallions, and potato sticks for $7. At the Dollar Store I got another few items, Jiffy Corn Muffin mix donation for the food pantry, creamer, popcorn for movies this week, and peanuts for Asian dishes I make- all for $4. The food pantries are going gangbusters as well as the church panries. There is such need these days! I fueled up a tank of gas, drove home the slow way, and generally feel pretty good with myself. Food, gas, books, all fuel for the body, car, and mind. I'm ready to go! Actually, I'm ready to stay! LOL.
Posted by Elizabeth Prata at 2:13 PM

Email ThisBlogThis!Share to TwitterShare to FacebookShare to Pinterest
Labels: reading

Enjoy the extra reading time. Richard Russo's one of my favorites!

I've never read him, though his Empire Falls came out while I was living in Maine, and he was really famous locally. Have you read Bridge of Sighs?

I am 2/3 of the way thru One Second After and I started it today! It's really good.

I have not. I got it for Darr last Christmas so it's around the house somewhere. I think I'll get to it next when I finish the three I currently have going.